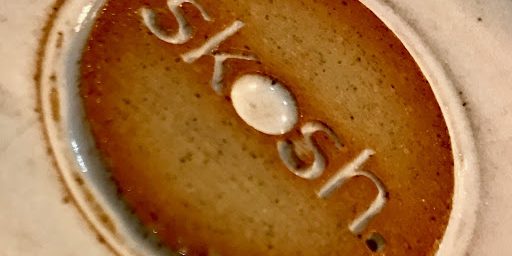 The professional kitchen can be a daunting place, with knives, boiling liquids, high pressure and demanding customers coming together to create an environment ripe for confrontation and injury. This unique cauldron thus can make for spectacular viewing if you can find the right vantage point. So when I called Skosh to book a table and was told the only space left was sitting overlooking the kitchen, I was rubbing my hands in glee – not necessarily in anticipation of soap opera style drama, but the opportunity to watch talented chefs at work is always too good to pass up. Also, if it all goes wrong, it’s fun to be close to the action.

Since Micklegate started to get its house in order and cast off the shadow of stag dos, cheap suits and mid-afternoon alcopop excess, it’s really starting to find its feet. The Rattle Owl led the charge and then the baton was picked up by the Falcon Tap and Sociale before Skosh asserted its yellow-tiled interior into the midst of the change, with Partisan most recently making their home. I’ve got to confess to being uncharacteristically late to the party at Skosh after having heard positives pile up from several sources I trust. With a week of chest infected purgatory adding to my whinges, this review is very late, but that’s the best excuse I have for delivering it so long after it became patently obvious that Skosh was going to be a wonderful addition to both Micklegate and York. Sorry ’bout that.

We already have the rather lovely Mr P’s Curious Tavern serving small plates in York and the ethos is similar here, with the menu comprising a variety of dishes that can be ordered to complement one another for a full meal, or ordered as one’s appetite demands while grazing throughout an evening. Chef Proprietor Neil Bentinck has clearly got a handle on this style of service and has put together a menu with an inviting and manageable number of dishes displaying both examples of classic flavour combinations and more thought provoking combinations that show inventiveness without resorting to gratuitous gimmicks.

We started the meal with a modicum of indecision that we tackled by taking our server’s suggestion to start with a ‘hens egg’ each and some bread. This was possibly the best value thing I’ve ever been served in a restaurant: at £2.80, the contrasting textures of potato and leek with accents of truffle all came together in wondrous harmony while we chose more dishes to be nicely surprised by. First to arrive was sourdough with acorn butter and ‘gunpowder’ spice, perhaps not a headline dish, but there’s always something comforting about slathering butter onto nice bread and, in this case, the peppery seasoning gave extra depth of flavour.

The next dish to arrive was venison tartare. I’m a complete sucker for raw meat and can’t resist it whenever it’s on a menu in front of me. In this instance it was complemented by oyster and yuzu cream and pakora scraps and completely blew us away. The combination of good old Yorkshire ‘scraps’, indian flavour and perfectly prepared meat was flawless with an enthralling mix of textures and perfectly balanced flavours. The next dish swung back toward vegetables, comprising beetroot, leek and apple with basil and ricotta. No single flavour dominated and the presentation tantalised without going over the top, and another dish arrived in short order. This time we headed toward seafood with bbq octopus presented under olives of pear under which black bean sauce was unusually subtle, not dominating the dish as one might fear from a less accomplished chef. While still gently chuckling to ourselves at the standard we were enjoying and the wonderfully tight working practices in the kitchen, chefs barely needing to exchange a word when preparing and plating to understand each other’s actions.

We were then presented with another superstar. Molasses cured sea trout with lemon marshmallow was utterly beyond reproach and, while I wouldn’t normally be so crass as to draw comparisons, it was easily comparable to a similar dish I’d enjoyed earlier in the week from a chef of great repute. Served on small skewers each small portion gave up a perfect mouthful of complementing flavour and melting texture. The last savoury dish we enjoyed was tandoor style half roast partridge, perhaps not screaming its own wonder in the same way as a couple of other dishes, but that’s not to understate the quality of dishes preparation. All this took its toll on me, so I passed on sweet duties and received predictably glowing reports on victoria plums with star anise cream from my dining comparison.

It’s not overstating things to say that Skosh is immediately one of the most desirable places to eat in York. It should be clear from this review that the food is of a uniformly wonderful standard, but while seated at the kitchen table it was mesmerising watching the guys cook. There was barely a word needed for the chefs to communicate their actions to one another and the sense of calm was stunning; any fears of soap opera style breakdowns in the kitchen were so unfounded as to be comical. Service lived up to the same high standard with knowledge of the menu uniformly impressive and depth of knowledge surprisingly broad. We even found out where the crockery was sourced without a moment’s hesitation!

After a bottle of wine and a moderately generous tip, the penalty for all this came to a hundred pounds for two people. For this standard of food and service, that’s an enormously fair price, our commitment further highlighted by Skosh being our first choice for lunch just three days later that represented even better value at eighty pounds for three, including drinks, as we controlled our gluttony with a firmer hand. I’d be happy to pay just to watch these guys cook, let alone eat the results.