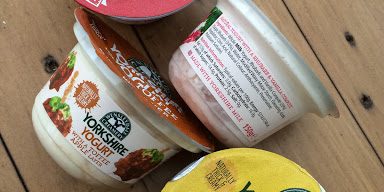 I was recently contacted by a PR company who asked if they might send me some samples from a local supplier whose products were to start feature on the shelves of a large nationwide supermarket. While this site is expressly not intended to give a free leg up to big business, in this case I accepted the offer on the basis that the company in question was Wensleydale Creamery who are infinitely closer to the ethos we espouse. Anticipating a few samples of their cheeses, I was knocked sideways when I opened the cool bag to find several yogurts. This presented a slight issue in that I’m really not keen on yogurt with bits in. Still, never to be defeated, I adopted a different approach and decided to crowdsource the review by dispatching my wife to her office with instructions to pass them out in return for a quote. Here’re the verbatim results:

Hannah (Lemon Curd) — “Very good. Not an everyday yogurt, more a treat or dessert as it’s so thick.”

Mark (Toffee Apple) — “It’s almost too thick, too claggy. It is more sour than you’d expect from a toffee-flavoured yogurt, which is actually nice as I’d expect toffee yogurts to be sickly sweet.”

Tamsin (Rhubarb & Vanilla) — “Right up my street as it’s thick and natural-tasting with chunks of real fruit. It’s exactly the kind of yogurt I go for as I avoid those low fat, chemically-flavoured yogurts.”

So there you have it directly from the ‘horses’ mouth. Good yogurts that can now be found in branches of Tesco across Yorkshire.