Hop on board with Brewtown Tours! 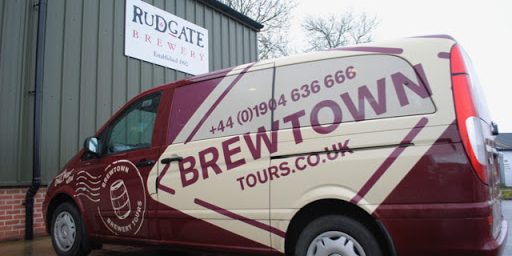 York has plenty of places to get a great pint, partly because of the range of marvellous breweries in the region, so if you’ve marvelled at the local beers you’ve seen on the bar you may well have wondered about going farther afield to check out the brewery and investigate. There’re a couple of difficulties with this plan though in that not all breweries offer tours, and probably won’t appreciate strangers appearing and demanding access at random times, and the need to take a car. Wouldn’t it be just marvellous if someone arranged access to a few breweries then laid on transport so you could enjoy a tasting when you get there too? I think you can see where this is going. Step in Brewtown Tours

Brewtown Tours is a new company founded by Mark Stredwick who recently returned from Australia, where he had been conducting similar tours to those offered here. The concept is simple: meet up and Mark will drive you to a selection of breweries while talking about the area and the beers between stops. The tour we went on met up at the York Tap at 13;00 before moving through Rudgate and Yorkshire Heart then returning to BrewYork back in the centre of town. I was joined by the Puboholic for the afternoon’s jaunt and Mark wasn’t hard to spot in the Tap wearing his branded clothes. So with minimal fuss, we were on the road.

As we arrived at Rudgate it was fairly apparent that this wasn’t going to be a perfectly manicured theme park style tour. People were washing vans, moving stock on forklifts and generally going about their business with the light hearted approach that comes to all employees on a Friday afternoon. This slightly unrehearsed approach really made it clear that you were in a working space and really in the guts of the business, something that wouldn’t otherwise have been available to the public and was much more interesting to see than some slightly more scripted tours I’ve been on. After being shown around the workings of the brewing equipment and hearing about the history of the brewery, which is celebrating its 25th birthday next year, we set about our first sampling of the day which took in Rudgate’s Jorvik, Battleaxe and Chocolate stout. Both the Puboholic and I were familiar with the two former of these, so it was no surprise to enjoy them so close to their place of manufacture, but the chocolate stout was a nice surprise for both of us, dark and interesting without being overpowered by the chocolate.

Time to hit the road again and make our way across to Yorkshire Heart. I’m less familiar with this Nun Monkton based brewery and had no idea that it was part of a business that already accommodated a large vineyard. As with Rudgate, this was not a sanitised (well, in the figurative sense) look at a brewery. While we were chatting with brewery manager Tim, there was plenty of enthusiastic cleaning taking place in the background as we stuck our hands into boxes of hops and compared scents. Moving onto the tasting, we enjoyed the beers, but struck a note of caution when faced with rhubarb beer. Ever since being horrified by a monstrous concoction called ‘Hey Pesto’, the idea of beer adulterated with fruits, herbs or, well anything if I’m honest, has not sat well. We both, however, found ourselves converted, if perhaps better sampled in smaller quantities.

Our final stop with Brewtown Tours was a location much more familiar to us in Brew York, the city’s newest brewery tucked away on Walmgate, which has been receiving plaudits for its brews, particularly its prize-winning Tonkoko milk stout. After five hours of sampling, being driven, talked to and engaged in conversation without a hint of boredom, it shows that Mark combines knowledge and passion to keep events, like the beer, flowing at an appropriate rate. It’s admirable that there’s a genuine emphasis on responsibility threaded through the afternoon. This is not a tour to recommend for stag dos that chase quantity over quality, it’s an opportunity to sample tours of quality breweries that aren’t otherwise open to the public and sample some great beers. You’ll be smiling when you get off the bus, not staggering. A great afternoon’s entertainment.

Disclaimer: While the experience was complimentary, all views remain as impartial as ever.