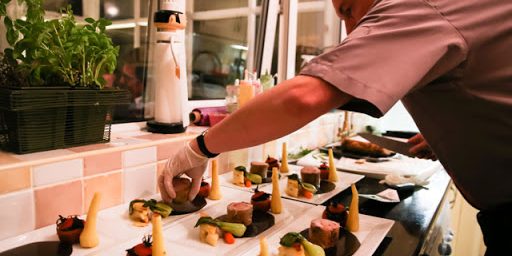 Entertaining people at home can be enormously rewarding, but also enormously hard work. As you head toward double digit numbers of guests, the amount of prep involved seems to rise exponentially, not to mention the subsequent clean up operation and it’s best not to get started on getting enough matching sets of cutlery and crockery together. Added stress inevitably comes from worrying about over- or undercooking elements of the meal; if you managed to get in an appropriate amount of drinks acceptable to a wide enough range of the audience; and then there’s the risk of one of the pets making an unscheduled appearance stealing food from someone. Step forward La Belle Assiette

Admittedly, not all of these issues have easy solutions (specifically our cats), but if you want to guarantee the food hits the mark, you could always hire a private chef! We were contacted recently by La Belle Assiette who suggested they send round a chef to cook for us and see what we thought. The chef in question was Yves Quemerais who is now based in Harrogate after spending 25 years cooking in his native France. With training from Alain Ducasse and having cooked for luminaries such as Richard Branson we were fairly confident he’d be able to pull off something pretty special for our group of eight.

A potential stumbling point when booking someone to come and cook in your own home is a lack of facilities, so a quick conversation in advance helped make sure that Yves was able to construct a menu that could be prepared in an average domestic kitchen.

As the evening arrived, Yves also did at exactly the time agreed and set about getting everything prepared. Our guests arrived over the next hour or so to friendly warnings not to eat too many of the root veg crisps I’d left out in an attempt at hospitality. After shepherding the group through to the dining table the amuse bouche arrived exactly on schedule. Scallop had been finely diced and perfectly seasoned before the cubes were sat on a delightful watercress veloute. I wasn’t totally convinced by the crockery here – a small bowl balanced on a second small ceramic – but this does neatly highlight another advantage of the service: Yves brings all the crockery for the service, so there’s no mountain of washing up left to tackle! I’ll take that over a style of bowl I’m not 100% on board with any day.

The starter was a cylinder formed of vertical vegetable slices, each exactly the same width, containing a mixture of Whitby crab and celeriac alongside a mildly tandoori flavoured king prawn. Even if I had somehow hidden Yves’ presence, there’s no way my guests would have believed I could have replicated the delicate care and attention lavished on this plate.

Moving onto the main course, with appetites whetted at the prospect of pan fried partridge breast, our expectations were met with ease. The meat was joined on the plate by a stuffed tomato, carefully sliced and layered potato and an incredibly densely flavoured sauce. The only thing that struck me as slightly jarring on the plate was the placement of the (delicious) parsnip that I can only describe as needlessly erect.

Dessert was the real show stopper of the evening. Plates were distributed that appeared to feature a large, extremely shiny, Christmas bauble along with a jug of caramel sauce. Upon pouring the hot caramel over the bauble, the two melted together to fall to the sides of the plate and reveal a Chantilly centre. Now full of superb food we were left to our own devices while Yves retired to the kitchen and set about clearing down, even going as far as filling our dishwasher and leaving the room cleaner than it had been provided to him.

Our guests all said how much they had enjoyed the evening and that this had been a unique experience. As a host, I found the event stress free and well-organised and Yves was extremely personable to have in my house. Yves’s menus currently start at £59 a head and other La Belle Assiette menus are available from just £39 a head which, while more than an average restaurant meal, I felt represented good value for the convenience, quality and theatricality of the evening.

Disclaimer: We were asked to review the experience and offered it on a complimentary basis. All opinions remain impartial.