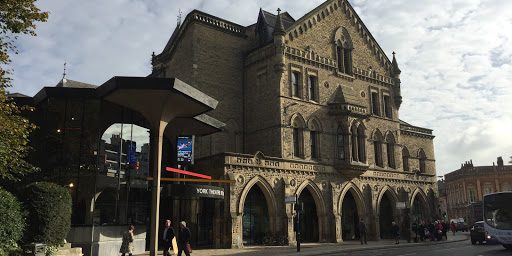 Last week, I was lucky enough to visit the Theatre Royal twice and see it from both sides of the stage, on consecutive nights no less! Since its reopening in April of this year after a six million pound refurbishment, they’ve been finding their feet in the variety of new spaces that have been created and working on ways to make York Theatre Royal Bistro stand out from the crowd. So it was with some enthusiasm that I accepted the invitation to take a tour and try some canapés based on the new menu.

Leading the change in the York Theatre Royal Bistro is Matt Beevers, formerly of 19 Restaurant on Grape Lane, who has taken on the role of Enterprise Manager with responsibility for the updated food offering and injecting plenty of enthusiasm into the venture; something he can’t be accused of a shortfall in! Matt’s background includes a period training in France prior to his return to the UK.

Before we got stuck into the food and drink we enjoyed a very comprehensive tour of the new facilities, both front and back stage, in small groups. I was in a group led by the Theatre’s Chief Exec Liz Wilson whose knowledge and enthusiasm for both theatre and refurbishment project really shone through. The care that’s gone into the refurbishment is obvious at every turn, from the repeated motifs that tie details together throughout the building to the neatly judged downlighting that cast a (literal) new light on the poured concrete elements of the structure; there’s a real sense of cohesion throughout. I’ll not go into every detail of the project – given the scale of it we could be here all day. Suffice to say that the new foyer area and counter along with the newly glassed in area reclaimed from the street is a transformative addition to the building that’s sympathetic without being self conscious about the structure’s heritage.

With the tour complete, we heard a little more from Matt about his vision for the dining experience in the Bistro before trying some canapés based on the menu. It can be unfair to pour too much judgement on a chef based on a few mouthfuls, I’ve too often had underwhelming morsels from otherwise accomplished establishments, but there were no duff notes here. We had steamed vermicelli noodles sitting in Thai flavourings, neither too powerful or shy, chicken satay skewers with the perfect confluence of tender inside and slightly charred outside, smoked salmon tartlets (hard to go wrong on that one!) and mini Yorkshire puds with morsels of rare roast beef. I’d still steer away from pronouncing judgement on the basis of a few bites but everything augers well for good food, both when nipping in for sustenance before catching a show or as a destination in its own right.

I mentioned that I’d been to the theatre twice last week. The next evening I was enjoying the theatre as a customer watching the incomparable Margaret Atwood holding forth on a typically diverse range of subjects; a thoroughly enjoyable experience. The theatre now works superbly on both sides of the stage as well as in the restaurant.