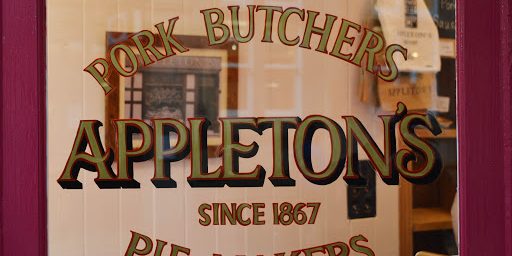 The centre of York has been without a butcher (save for those in the Shambles Market) for a number of years since the closure of the much loved Scotts on Low Petergate in rather unfortunate circumstances. Around the edges of the city, we have a few good butchers but now, for the first time since 2008, we have a permanent butcher shop in the centre of our city with the opening of Appleton’s York who’ve taken up residence on Lendal amongst a couple of other new independent businesses, giving new life to the street.

The otherwise unobtrusive frontage is painted a striking colour and features a lovely piece of stained glass over the door depicting the cuts of meat of a pig. Produced by local artist Ann Sotheran, it reflects a commitment to local sourcing and quality presentation. As we arrived to welcome the guys to the city, we were furnished with local beer from the newly opened and flourishing Brew York and the smell of oven-baked pies that were still too hot to eat; a pretty decent combination in my books.

Truth be told, there’s not a massive amount more to say on this one. The Appleton’s York pie samples we tried were uniformly superb, the quality of the meat and enthusiasm of the owners shone through and the range of pork was wide. None of this should really be a surprise given that Appleton’s has been providing the good people of Yorkshire with pork for nearly a hundred and fifty years from their other store in Ripon; rapid over-expansion is not an accusation that can be levelled at these guys. After thoroughly pushing our luck with the hospitality, we marched off into the night with full bellies and happy thoughts along with some bacon, sausages, ham and pies to sample, all of which lived up to the expectations that had been set. We’ll be back soon!