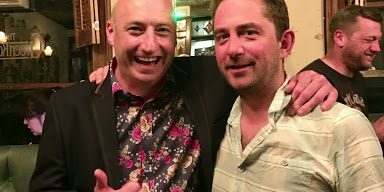 We’ve been big fans of Andy Annat’s cooking for some time now, so were extremely eager to take up an invitation to head over to Harrogate’s Blues Bar and celebrate an updated menu as their first birthday approaches.

First things first, don’t worry, those signature multi-tiered platters are still very much in evidence, but there’s now a greater, additional, focus on providing a large variety of smaller tapas-style plates to satisfy smaller appetites and patrons of the bar downstairs wanting a snack to sustain the evening. While the core of the menu is still meat heavy, there’re a bunch of new vegetarian options too, alongside fish such as crayfish mac & cheese, cajun blackened salmon and soft shell crab. As far as variety for veggies goes, highlights include okra fries, crispy fried pickles and onion bhaji.

If you’re in for the long haul then Chateaubriand makes its debut on the menu alongside beef Wellington but, for me, it’s hard to stray from the platters. The opportunity to get so much variety, and inevitably tomorrow’s lunch, is too much to resist. If there is something specific you’re desperate for then the team will always do their best and there’re now set options to add more expensive cuts to the variety for a set cost.

As always, the samples served at The Blues Bar last night were superb and the canapés varied and tasty. My only ‘complaint’ is that there were enough people there to finish the lot off and I have to cook my own lunch today!