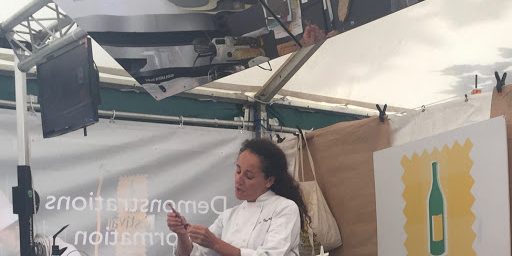 I’m not great with faces off that there telly. Recently I asked a colleague who Caroline Flack is after noting her autobiography ready to read on her desk. The incredulous response of “Is that a serious question?!” suggested I may have dozed through a few moments of popular culture (something to do with the X Factor apparently). Thankfully, on a more local level, my radar seems to be a bit more on the ball, hence I’ve been an acquaintance of Sara Danesin-Medio for some time after her mouth-watering success on Masterchef a few years ago.

Since then, Sara Danesin-Medio has built a strong reputation as chef and food consultant while also continuing her well-regarded supper club right here in the centre of our fair city. Last week, she had two cancellations and Mrs YoaF and I were lucky enough to be able to drop in at short notice.

On arrival (through the wrong door, sorry) I made friends with the house cat, tactfully declining to mention any of the YoaF cats, and moved through to say hi to Sara, who gave me an enlightening talk on risotto rice that underlined her commitment to detail.

Hosting duties passed on to her husband, Sara made herself free to concentrate on the food while the group made each others’ acquaintances. Being a late addition to the group, we could have ended up out on a bit of a social limb, but as the food started to arrive, our neighbours made us welcome, offering up plenty of their (very pleasant) wine to facilitate our induction to the group, despite some differences of opinion on the necessities of fox hunting.

Time for something to eat: quail eggs with truffle came together for the amuse-bouche, and thankfully not “over-truffled” for the sake of exuberance, it gave an indication of well-balanced dishes to come.

The main attraction was fillet of venison on a bed of smooth mash aside root vegetables. Sticky jus, tender meat and a wonderful medley of flavours not dominated by the meat made up a well-balanced plate that triggered silence around the table.

The starter was a partridge risotto of surprising lightness. I’d love to be able to recount the details imparted to me by Sara of the striking differences in risotto rice grains, but my ability to absorb information proved somewhat less than that rice taking in stock, so I’ll just report that Sara knows her rice, and indeed her pigeon. Perfectly seasoned meat presented with expert care on a well-judged dollop of risotto lived up to the ingredients wonderfully and served to further heighten expectations.

It should be noted just how well service went. I can reliably make it across a room holding two mugs of tea, but for a single server to clear covers in double figures without throwing anything at anyone or burning himself is a decent feat, and one which thankfully allowed a main course to drop in front of us after no more than a civil pause.

As the evening drew to a close, only desert remained. I’m pretty confident that my sweet tooth was the one brutally wrenched from my jaw with a sickening crunch by my ‘dentist’ in 2002 so, while I appreciate the skill in such dishes, my expectations of shock were as low as ever. Armagnac parfait kicked those expectations into check rudely, textural contrast with a crumb scattered on the plate leant depth, while the parfait itself balanced sweetness against depth of flavour wonderfully.

We had a marvellous evening, ate marvellous food, drank marvellous wine donated by new friends and were able to walk home. Sara makes wonderful food and it’s a pleasure to be in her home with new acquaintances. I also elicited opinions from a couple of friends who’d previously visited; their thoughts are as telling as mine.

“It was very tasty and we had a lovely evening. Her husband was a great host. “

“Very tasty. It pretty much embodied what I envisaged a good supper club to be like. Their house was perfect for the job too!”

If not me, listen to them. I bet Caroline Flack hasn’t heard of us either, but I’d wager we know food in York better than her, regardless of having been on that there telly.

Disclaimer: Sara Danesin-Medio asked us to attend at a reduced cost after those cancellations and, perhaps, hoping that I would say nice things here. She made no specific editorial requests and clearly, her confidence was justified.