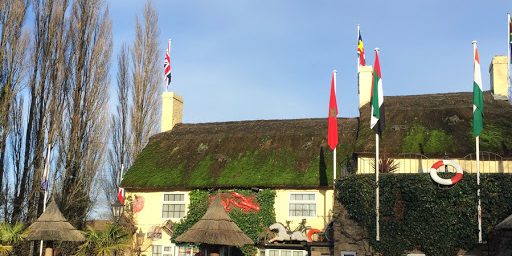 I find it funny that despite the best of intentions, there can be places that one intends to visit and is enthusiastic about doing so, but somehow months and years slip by without ever bringing those plans to fruition. There’re a few places in the centre of York that fall into this category for me (Lime House, I’m looking at you!) but I’ve, arguably, a better excuse for those further afield such as the Pipe & Glass and…Crab and Lobster….Something else pushing toward a visit for the past 8 months has been a gift voucher courtesy of Mrs YoaF’s street dance crew who obviously know us well.

Realising that we’d been fool enough to neglect this generous gift for such an inconsiderate period and that January was laying into our eating out budget, we got booked in and before we knew it were hurtling up the A1 with appetites primed.

The Crab and Lobster joins up with Crab Manor Hotel if you’re in the market for a overnight foodie trip, but offers plenty to justify a lunchtime trip too in a lovely thatched building. The outside dining area was extremely attractive and well realised, though would have certainly been more attractive if the temperature was in double digits. We paused at the bar to grab a complementary sausage (so to speak) and a drink while taking in the fishy ephemera before being led to our table.

The size of the dining area was quite striking, far greater than the quaint frontage suggested but one supposes necessary for the wedding business that brought a steady stream of prospective clients through the restaurant as they plotted their big day. This would be a perfectly reasonable request before booking a wedding venue, but seeing the same spiel given several times while my food was eyed up did make me feel a little like an exhibit.Opting for a combination of a la carte and set menu dishes, we set about some delightful bread (three flavours) and girded our loins.

Our server quickly furnished us with water while we set about the menus, a tricky task given the large number of dishes on offer for both a la carte and the set menu.

Starters of crispy fishcakes and wood pigeon breast arrived promptly, conveyed to our table by courteous servers who were neither needlessly intrusive or inattentive, and hit the mark nicely. The fishcakes could be accused of slightly being padded out with potato, but the flavours were there and the poached spilled its yolk admirably. The wood pigeon was an unqualified success: a brittle crisp of pancetta shattered to contrast with the red wine jus, while a disc of fondant celeriac underpinned the wonderfully tender meat, absolutely wonderful and with a lightness of touch defying the description.

The mains we selected starred salmon loin and swordfish. The salmon was crusted with crab meat to give a rich counterpoint to the salmon’s almost creamy texture. Simple new potatoes were cooked to the point of perfection and anchored a shellfish bisque that tied the elements together perfectly without overwhelming any single one.

For me the swordfish was the main event. Lightly and evenly charred on the outside while remaining tender inside, it was adorned with king prawns and a thai curry sauce. The spice was perfectly judged and it rounded the plate out to perfection. The side plate of basmati rice was nice, but a touch over-generous.

Mrs YoaF stepped up to the challenge of dessert, admitting massive relief a few days later that I’d turned down her offer of a mouthful of her sticky date and toffee apple pudding. Her commitment to completing the course in as quick a manner as possible demonstrated it’s quality. I pocketed the cocoa-coated chocolate truffle that came with my espresso and loosened my belt for the drive home.

The bill, including a glass of wine each, came to £70. Fair recompense for a lovely meal at the Crab and Lobster that will surely prompt a return visit. It’s pretty daft that it’s taken so long to get out this way, all the more so when you consider the minimal financial commitment involved here. Lesson learnt, time to pull my finger out and check out long neglected venues.