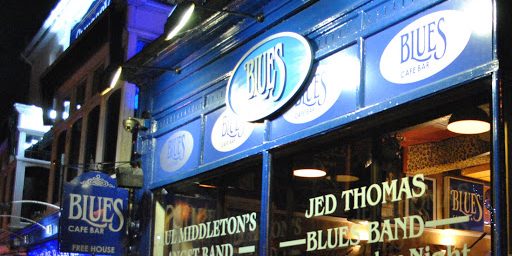 If you’ve been following my witterings for a while, you may remember last year I schlepped all the way to Knaresborough to eat BBQ food in the middle of a cold February. What I found there was some absolutely fantastic food served in a relaxed environment by the effervescent Andy Annat, a three-time British BBQ champion and general outdoor cooking obsessive with a tremendous pedigree in cooking this sort of fare. Fast forward some months and my interest was aroused by the news of a collaboration between Mr Annat and the good people of Pivovar to launch the Pavement Vaults in York. For no good reason at all, that interest hasn’t yet translated to action so the news that, after that successful launch, Andy Annat at The Blues Bar has a new menu was met with great enthusiasm.

The Blues Bar is a live music venue a short walk from Harrogate station with a decent selection of real ales and a space upstairs that previously offered Egyptian food. As we arrived early on a Wednesday evening, it was inhabited by musicians starting to get set up for the evening and post-work drinkers apparently looking for somewhere uncomplicated to smooth the rough edges left by the day’s travails. We hustled ourselves upstairs to “The Green Room” ready to occupy a booth. I quickly hustled back down the stairs when I realised that’s where the conveniences are, something that drew recent criticism on a well-known review site. Each to their own.

The Andy Annat at The Blues Bar menu promised all manner of carnivore’s treasures, but a surprising number of intriguing vegetarian options too. You’ll have to excuse me from sharing the menu detail here, but as it’s still under development it’d be potentially mis-leading. I don’t doubt the dishes we had will remain though (they better had do!). Starting with light bites of salmon rolled around cream cheese on crispy toast bites topped with a smear of caviar, we quickly decided that deciding was something we wouldn’t be able to do. Delegating responsibility for choice to our host, we awaited our first dish: buffalo wings served with three sauces of varying spice. These were authentically impossible to eat with any dignity and beautifully tender while the dipping sauces all gave their own character to the bite. Even the hottest, about which we were cautioned, didn’t sacrifice flavour for aggression. Taking full advantage of the essential finger bowl, we girded our loins for the main event.

A lengthy plank was slid down the centre of our table after a decorous pause and we forced ourselves to take stock of the marvellous situation in which we’d found ourselves. Beef rib, lamb kleftico and veal rump formed the spine of the proposal while chips, pork scratchings and salads teased our attention from the sidelines. Unsure where to start, I popped a pork scratching in my mouth to buy thinking time and immediately felt assured my sky-high expectations would be met: taking a mere 16 hours to produce and without a hint of the cloying fat found in their pub-based brethren, the morsel melted away leaving a delightful pork flavour. Chips dusted in bacon powder were light, and in retrospect, I’d have held onto the sauces from the buffalo wings to give them another dimension.

When photographs were done and self-control exhausted, we dived on the veal rump. Accompanied by Mediterranean vegetables that were char-grilled to perfection, the meat was wonderfully tender; neither too powerfully smoked or cooked beyond a delicate pink, the texture was simply beyond comparison. It’s not exactly a spoiler to reveal that we’d been presented with a lot of food, so it shouldn’t be a surprise to hear there were leftovers to take home. I think Mrs YoaF articulated it best when she took a bite roughly two hours later and just started laughing as she shouted “Holy ****! It’s not even hot any more, so how can it be that tender?!”.

The lamb, seasoned with garlic butter, hit similar chords of reverence as we marvelled at the texture. Perhaps the flavour wasn’t of the same revelatory standard of the veal, but in this company, that’s nothing at all to complain about. The meat was lean and justified its presence beyond doubt.

Of the three meats, I’ve waited to try and describe the beef short rib until last. I could trot out the usual superlatives about unctuous sauce, a beautifully smoked crust, meat falling apart even before the knife seems to come into contact with it and so on and it would be entirely true. It wouldn’t do it justice though. Suffice to say that the sauce perfectly balanced slightly bitter and slightly sweet notes and was of perfect consistency. This is a dish that will stay with me for a long time and form the basis of many, many recommendations.

To finish, we had a lemon pannacotta, about which I was able to finally pick fault. It was too big. I commented on social media afterwards that if your only complaint about a meal is that you can’t finish the dessert, then you’ve probably had a pretty decent evening. Killing time before the train home (only £8.40 return) we had a lengthy chat with Andy about his ambitions for Andy Annat at The Blues Bar. Taking his butchery skills as a chance to minimise produce costs, he wants this to remain as accessibly priced as possible (indeed the menu we looked at had mains starting at ten pounds) and not become exclusive. Sourcing great produce, training staff well and maintaining a friendly atmosphere while the food offers a sense of fun will be key to maintaining the success of this place, something I don’t doubt for a second it will be. It was a tremendous pleasure to visit and the second funds and schedule coincide, I’ll be paying a repeat visit.

Disclaimer: While this meal was complementary, all the opinions expressed are impartial. I was accompanied by Claire from http://greedywordsmith.com who said “Andy Annat’s food does not disappoint. The menu is carefully balanced to provide appetising options for both the committed carnivore and their vegetarian companions. I can’t comment on the visit without urging visitors to consider the incredible beef rib and its dark, alluring sauce. I will definitely be making a repeat visit.”