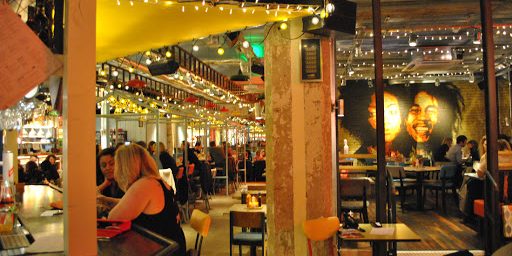 Caribbean food in York, to put it mildly, doesn’t have a strong heritage. A pop-up serving in a few pubs has by turns produced shockingly good jerk chicken and strangely under seasoned dishes, so Turtle Bay York popping up in the centre of town piqued my interest. Mrs YoaF was in Manchester for a conference a little while ago where she tried Turtle Bay and proclaimed to have expressed a reflexive squeak of pleasure at the flavours that distracted fellow diners. A decent recommendation.

That was earlier in the spring though and since then we’ve had news of an apparent scandal based around tipping policies in mainstream chain restaurants around the country. My reaction to this was of course distaste, but what I wonder is how this compares to local independents’ policies. It’s so easy to denounce chains on the basis of their size, but I’ve heard stories about local restaurants that are rather worse in some cases, so I’m going to leave comments to speak for themselves.

I was asked to visit Turtle Bay York a couple of times, initially refusing with a chord of indignation chiming as I couldn’t elicit forensic detail of that tipping policy despite a few requests, but I subsequently agreed to head along and judge the experience on its own merits while discussing things openly with the staff.

The night we arrived, there were buy-one-get-one-free cocktails on offer for Bethan to get stuck into, Marley Mojito breaking the tape of her internal race to decision, while I opted for a Carib beer. As the drinks arrived we noted neat details such as linen cloths and decent cutlery before choosing starters of Jamaican fried whitebait and chilli fried squid. Both arrived quickly, benefiting from well-judged spice and crisp finishing. My biggest complaint was the quantity of whitebait; if I’d not been allowed my main until finishing them, the evening may have taken on a trickier tone! Luckily, we kept them on the table until the end of the meal for periodic picking.

With Marley mojitos dispatched and that slightly generic Carib replaced with a decent chenin blanc (six pounds a glass), it was time for mains.

We went for the Curry Goat and, making sure ‘jerk’ made the cut, jerk salmon. The salmon came with sweet potato mash and a good dousing of jerk sauce that packed a punch just beyond my slightly lame tolerance. The sweet potato was a disappointment, interspersed with full-sized solid chunks of carrot that presumed to fly below the radar while softening the unit cost of the dish, and there were some dollops of seasoning and creaminess, but not what I was hoping for. The salmon was well-prepared, skin crisped but flesh soft, but the jerk sauce was a bit overpowering. I need to stick my hand up (yet) again to admit my poor spice tolerance, but this felt like a blunt hammer on a well-cooked slice of fish.

Goat curry is something that’s cropped up in a few Keralan restaurants around this neck of the woods and has, in every case so far, been a highlight of the meal. This version of the dish had undertones of coffee and liquorice. Slow-cooked and moist, everything hit the spot. The slightly dry pitta served with it may have been better replaced with a pot of rice, but it was still a well-rounded dish that I’d happily order again.

At this point Beth decided to pit herself against the hot sauce left on the table for those with a greater tolerance to heat than myself. She should thank me for not including the more embarrassing photos!

Last up was poached mango for Beth, taking up the sweet food baton for me. Reportedly reminiscent of mulled wine, the frozen yoghurt split into the hot sauce in fairly short order without doing much positive.

Finishing the meal we were struck by the red shirts that the servers were all wearing. While not a prescribed uniform, the colour put me in mind of Star Treks famously dispensable red shirts as I came back to thinking of the staff’s status here and that tipping policy.

The manager was good enough to come and have a chat about the meal so we went back to that question of tips, to which I still don’t know the answer. I’m assured that 100% of the tips end up with the staff, but when I asked the manager, he point blank refused to elaborate on the basis that anything he said would be biased personal opinion. Being issued with a professional rebuff when I suggested that a factual explanation wouldn’t breach personal liability doesn’t suggest a surfeit of confidence from the management to let its staff speak their minds. However, nobody has said anything explicitly negative to me, so I’m not going to assume the worst in the absence of having researched the competitors’ policies.

Turtle Bay York is a nice place to sit: well-presented and with a palpable buzz that’ll benefit weekend nights no end without overstepping toward the binge drinking-centred culture that parts of York can tip into.

Good value, decent food and a buzzing atmosphere. If I was a 20 year old with a sense of optimism rather than a slightly misanthropic 36 year old looking to make ostentatiously positive decisions on where my inconsequentially small tips go, I’d probably be hooked.

Disclaimer: Turtle Bay invited us to review the restaurant on a complimentary basis.