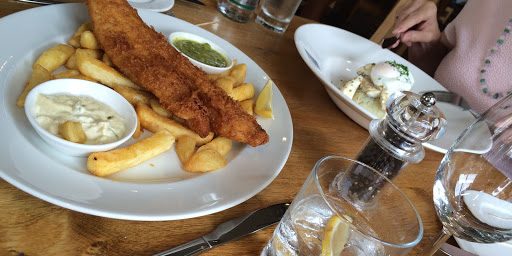 It might seem a little perverse to go to a chain restaurant in the middle of York’s premier food event but necessity and convenience have dictated shunning more home grown venues in favour of Loch Fyne York. As I reflected upon here, I have a vein of Coeliac disease running through my family. So with a visit from my mum and an aunt visiting from overseas due, the easiest thing to assure no untoward gluten events was to book somewhere that coincides previous confidence inspiring visits with my own desire to eat seafood.

I’ve always felt Loch Fyne inhabits a curious spot in the perceived restaurateur hierarchy. Too prolific to be a ‘local’, too good to lump in with ubiquitous high street establishments, it’s a tough place to be snobby about. Generally I prefer to drop my money into local business but, based on previous visits, it’s hard to knock the freshness of the produce or the staff’s knowledge and enthusiasm.

I nipped in on Saturday, mid ale trail, to book a table. Better safe than sorry despite the number of covers catered for by the immensely attractive former Stubb’s hardware shop building. It of course turned out this was pointless, the greeter offering us our choice of tables upon arrival.

Slipping between the a la carte and set menu (£10.95 for 2 courses if I recall correctly. bargain) orders were placed and I chose to accompany mine with a Muscadet chosen from the extensive selection of wine available by the glass.

A bowl of olives to nibble passed the time for those not enjoying starters while the two of us who were doing so tucked into crab cakes and Cullen Skink. I didn’t try the Cullen Skink but it was reported to be superb and certainly looked & smelled the part. My crab cakes were less impressive, the ratio of crab to cake skewed a little in the wrong direction. The sweet chilli sauce livened it up a little at the expense of being a touch generic.

Cracking onto the mains, the food distinguished itself well. Smoked salmon fillet salad was nicely seasoned and presented with generous amounts of salmon, traditional battered cod and chips were very well received and accompanied by superb chips and my pan fried hake was cooked to perfection – beautifully textured and seasoned. The accompanied potato dauphinoise were a touch under seasoned but cooked perfectly, still moist but entirely identifiable as slices of potato and not cooked to mush. Rather less convincing was the samphire that supplemented its natural salt with enough additional salt to leave me choking down pints of water for the rest of the day.

The Muscadet I ordered was perfectly pleasant but not quite showing the depth of flavour hoped for. To proclaim it watery would be unfair but it certainly wasn’t quite what I’d hoped for.

Skipping coffee in favour of a stroll through the Food Festival, the bill was settled at a perfectly reasonable £20 or so a head (note that only included a single glass of wine) and we left entirely happy. A lovely building, attentive but not overbearing staff, reliable gluten awareness and freshly prepared produce served to its potential make Loch Fyne York a cost effective and pleasant place to be. I can’t say I found it without fault, but it was entirely Fyne.