Steak on a stone in Swainby 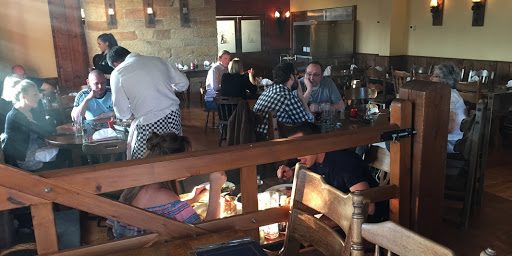 We’ve already established that well done steak (well done as in ‘competently cooked’, not well done as in ‘ruined’) is one of lifes true joys so when I realised that a pub in the village I was visiting specialised in steak it didn’t take long to arrive at the door. The Blacksmiths Arms is situated in the beautiful village of Swainby at the edge of the North York Moors and has been established for over 200 years, presumably seeing many changes in clientele and style over that period! These days the focus is on a friendly welcome, good food and good service in the attached restaurant including the intriguing Steak on a stone.

Of particular interest on the meat front is how the steaks are cooked. Rather than being prepared in the kitchen, the meat is cooked at your table on a heated slab of stone! Heated to 400 °C and bought over along with the cuts of meat ordered it’s pretty important to make sure that this is a strictly hands off experience for customers, having completed risk assessments before myself I can but shudder at the paperwork presumably involved in getting to this point.

We plonked ourselves in the bar while looking at the menu and made do with a glass of white poured from a bar tap rather than a bottle. We really knew what the plan of attach would be already so the menu shuffling was a bit of a charade. It was always going to be Steak on a stone, ideally with a bit of seafood on the side.

We went for the posh surf n’ turf (fillet steak & prawns) and a sirloin. We’d hoped for the opportunity to add a half lobster tail to one for a very reasonable six quid but sadly they were all out. At least by taking the chance to browse the menu we saw the rather forcefully worded note confirming that nothing we were to be served would be boil in the bag. Admirable sentiments of course.

Moving through to the restaurant area with the friendly front of house staff we had a choice of seats and took delivery of a bottle of Running Duck Merlot from the well balanced wine list. Organic and enjoying pest control via those titular ducks, definitely a cut above most pub wines.

Skipping starters in favour of a later assault on dessert, we sat back and awaited the promised table based searing, which thankfully arrived in less than the threatened ‘hour or more’.

The friendly chef presented the meat and explained the process and thinking behind the method while deftly cooking, impressively managing not to burn anyone or set fire to anything while subtly liaising with the waitress to coordinate arrival of side dishes.

Temperature control was always going to be an issue with this method of cooking so it wasn’t a monstrous surprise to find both our steaks cooked a touch the wrong side of the requested ‘rare’. Cooking on the stone certainly did seem to give a consistent searing across the surface of both portions but I have to own up to being unconvinced of the benefits. Impossible to argue with as a nice piece of theatre and undoubtedly offering a chance to speak to the person cooking for you, cooking like this does by necessity cut down on the chance for the cooked steak to rest before it hits your plate. Cooking the prawns in the juices from the meat gave them a pleasant beefy tang but that would be as comfortably achieved in a pan. That’s not to say the steaks weren’t very nice indeed, I’m just not entirely sold on the benefits of the process. Accompanying chips were top notch and bearnaise took the edge off the onion rings well, presenting a well balanced meal that left a hole just the right size for some sticky toffee pudding.

Decently sticky, sticky toffee pudding drenched in butterscotch sauce and with pouring cream requires little more qualification in its description than that. A nice but not overpowering dish.

All in all for eighty quid we had a lovely evening. Whether or not the alleged benefits of the stone based cooking were delivered on, good steak, good wine and friendly service in a nice building hits all the marks it needs to well. It could perhaps do with losing the aggresive disclaimer in the menu but all the fundamentals are in place. On a side note, the garden is lovely too. Perfect for reading the paper on a hot Saturday evening as we illustrated the following day.