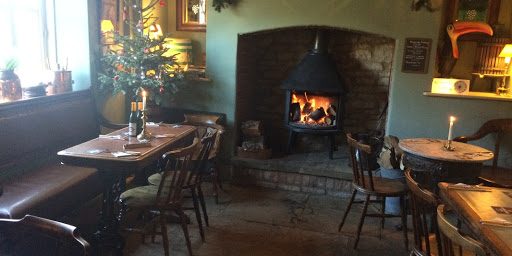 Another of York’s food obsessives is currently engaged in a wallet-shrinking and waist-expanding quest to find the best Sunday lunch in York. You can read about his ongoing exploits over on the Puboholic site but the the moment my primary interest is in using him as an excuse to go out for lunch.

I’ve been meaning to get back to the Grapes Inn Slingsby and try the food ever since a Slingsby v York Bar Billiards match a while ago that resulted in a rather one-sided home victory. I’ll concede that Slingsby isn’t exactly slap bang in the middle of York, but if you live in York and don’t make it this far out occasionally, you’re missing out, so I make no apology.

After a polite pause, the plates of meat arrived, looking well up to the task when paired with the dishes of accompanying vegetables. Any paranoia about overcooked beef was quickly allayed as I distracted Mrs YoaF and stole a bit from her plate. Pleasingly pink at its centre and with a nice fatty undercurrent, the beef easily hit the spot.

My pork was equally well-prepared, crowned with a chunk of crackling that interrupted the plate’s texture in the most satisfying way on top of a couple of slices of moist pork.

Roast potatoes and parsnips gave body to the plates, irrespective of accompanying animal and were well executed. Perhaps the roasties would have benefited from being a touch more crisped. The parsnips sat on a bed of parsnip crisps that gave a touch more variety to the textures and concentrated flavour.

Vegetable side dishes were uniformly hearty, cauliflower cheese and mashed swede running out the winners after careful consideration. In the interest of genuine consumer advice, I need to find a complaint, so I need to reference the Yorkshires. While risen perfectly, they were just a critical touch overdone. Not enough to compromise the meal, but noteworthy nonetheless.

Slightly surprisingly a majority of the party had space for a sweet course (if I’d expected the main to be sized for a mortal I’d have been on those pheasant goujons) so went for sticky toffee pudding. At this point it hardly needs repeating that everything was superb as we shared the dishes. Rich butterscotch sauce smothered a moist chunk of cake topped with physalis.

Yes it’s a bit of a drive, but it’s well worth it for a hearty Sunday roast in a picturesque location. There’s a bar billiards table too, what else could you want? Get out there.