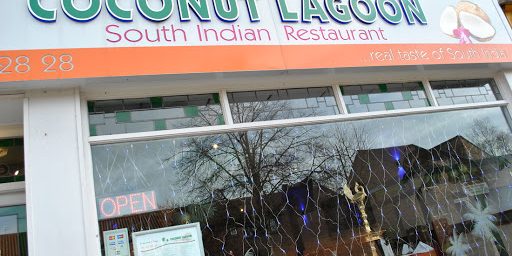 Since the prospective Mrs YOAF and I set up home together a couple of years ago, I’ve been lucky enough to partake in a group of friends’ annual Christmas curry celebration. The demeanour of this occasion took a slightly more adult turn this year – indeed the previous twelve months have seen three babies, a wedding and an engagement amongst the group – so a setting was needed to accommodate the expanded party, enter Coconut Lagoon.

I didn’t organise the event, but I suggested Coconut Lagoon on the basis of self indulgence (far too long since I’ve visited) and was a bit surprised to hear that it was closed on a Saturday lunchtime. This turned out to be a blessing in disguise as, due to the party size, they were happy to open for us. All boxes ticked!

Thirteen of us with ages measured variously in months or years gathered to an opening offering of a shot of a sweet, lemon-flavoured liquid to cleanse one’s palate. I seem to recall this coming at the end of the meal on my last visit, at which juncture it was rather more effective and less dividing of opinion.

One of the party started with a coffee about which opinion was rather clearer. A tea pot of extremely weak coffee served with a pack of instant coffee didn’t really cut it and was as confusing as it was average.

Moving onto starters, food things improved immediately and dramatically. I’d heard that the “Coli-65” was excellent – cauliflower battered in ‘Mixed herbs and spices’ – and so it proved to be. I have no idea what it contains 65 of but the texture and flavour was right on the money. Crispy at its extremities but moist in the centre, forget any cauliflower prejudice right now.

On the meatier end of the spectrum the beef dry fry was fantastic. Well adjusted to my slightly pathetic tolerance for spice, as with the cauliflower, what came to the fore was the evident expertise of the chef. Crispy beef is so often a tightrope that chefs topple from to fall on a bed of overcooked dry meat but the contrast between the soft centre and crisped edge was right on the money and flavour penetrated the entire dish (rather than clinging to the outside of the meat).

Reports on the other starters were just as effusive. Lassis accompanying starters for a few of us hit the spot. At this point, my high expectations were getting a hefty kick in the teeth and being raised further.

Coconut Lagoon occupies a site that previously saw a couple of other restaurants close before their time, so it’s fantastic to see them still prospering. Under thirty quid a head for a couple of courses and mixture of drinks is fair so, odd coffee and decisive sweet drinks aside, you really need to get here. I’ve done myself a disservice not shouting about it earlier.