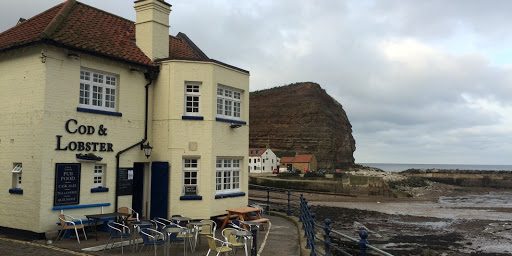 OK so I’m straying a touch from my York-specific brief here a bit but Staithes isn’t too far away and the affection I have for this place buys a bit of leeway. The Cod and Lobster Staithes is an unassuming harbour side pub in the labyrinthine and picturesque settlement of Staithes. Visiting cars are banned from descending the steep hill to the frontage so a knee-challenging descent is required before getting stuck into food. I’m in no position to endorse the full menu here, I go only for one reason once a year. Crab sandwiches, the day after Boxing Day.

A wood floored pub that oozes practicality, dogs poke from under tables and sandy footwear isn’t frowned upon. The bar choice is largely standard but includes a few decent ales including one brewed specifically for the pub. My memory fails me a little after only one pint, but I seem to recall it being called “Old Jack’s Tipple”

A large blackboard conveys the evening menu but, as I say, there’s only one reason I’m here. On a freezing cold day while I head south to York I can think of no better place to stop for a bite to eat and coastal shelter.

Those Cod and Lobster Staithes crab sandwiches are crammed with meat of varying colour, well dressed and generous. I tempted fate by commenting on the lack of shell in the meat but that single irritating crunch didn’t hit a filling so new years eve partying remains on the cards.

Chips were just about to hit the burning point in their oil and balanced good texture and flavour against a drenching of vinegar and mayonnaise. Salad was expertly dressing too, not the cornerstone of the meal but enough to flesh it out expertly.

I’ve no idea what the rest of the menu is like but I’ll certainly be back in about three hundred and sixty three days. Raise a glass if you turn up too.