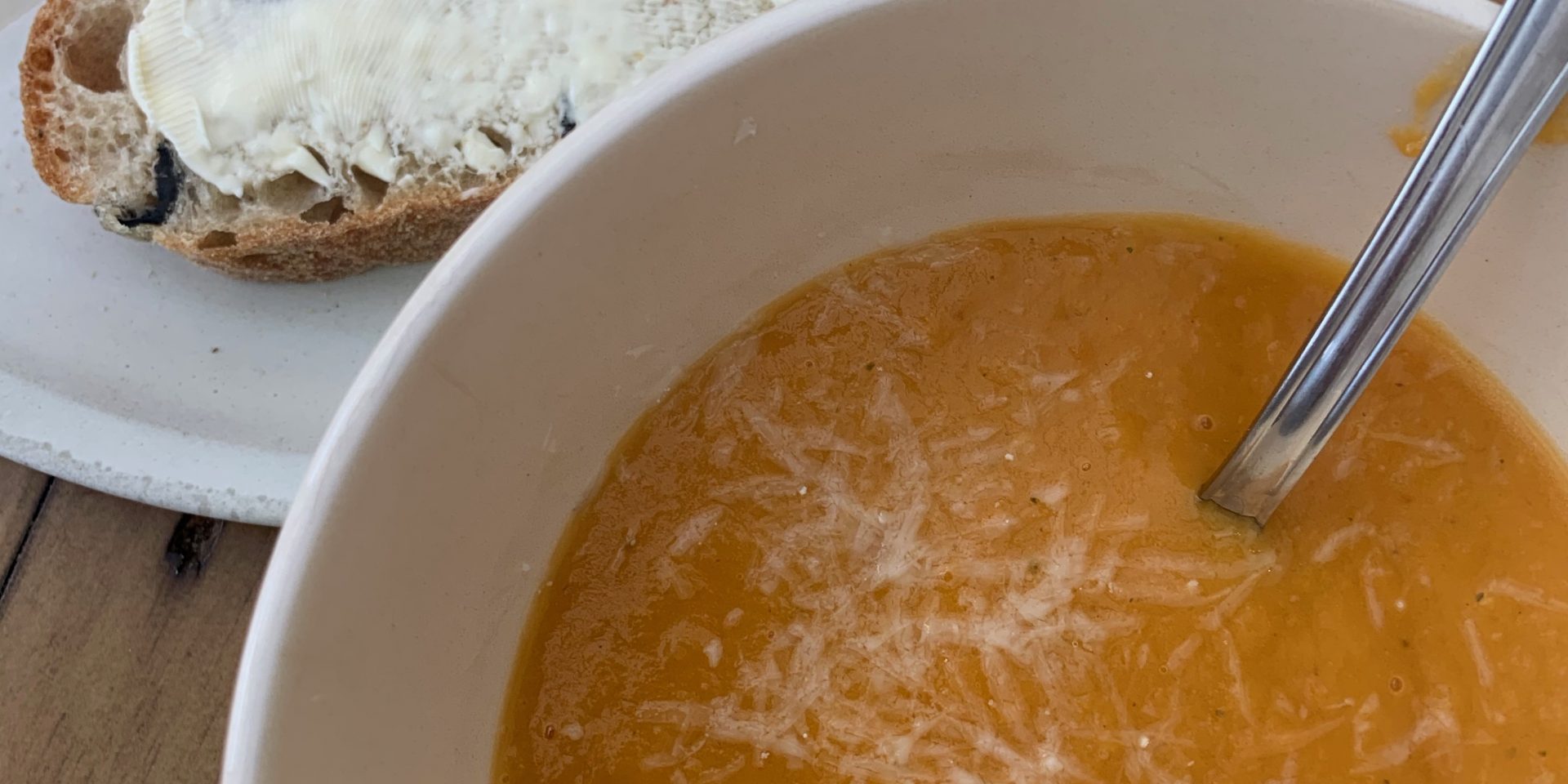 It may come as a surprise to hear that I don’t eat out for every single meal, or well it might have come as a surprise this time last week but perhaps less so now. I love cooking and am generally a little too quick to take over in the kitchen, but my approach to cooking tends to be a little cavalier in terms of weighing and measuring. That being the case, I’ve not featured much in the way of recipes here over the years but in the current circumstances a few tips might be handy for less confident cooks. With the amount of time we now find ourselves having to fill in the house, it would seem a perfect time to have a crack at a few new things and put together an easy soup recipe, even if you’ve a 2 year old to occupy you too!

Today I had a couple of sweet potatoes starting to look like they needed using up and nothing in mind for lunch so thought I’d knock up a soup. I’ve had people tell me they think soups are intimidating, but really it’s not much more than whatever you have to hand that vaguely works together cooked together and blitzed with stock. Today I used:
2 average sized sweet potatoes
1 white potato
1.5 shallots (one of them was starting to go a bit soft so trimmed a bit)
1 garlic clove
Vegetable stock
Vegetable oil
Salt

Because I had a bit of time on my hands I decided to fancy things up a bit by roasting the sweet potatoes first, so I popped a roasting tray in the oven with some vegetable oil to heat at about 200c as I was wanting to get a good bit of caramelisation going. They’d continue cooking later so didn’t have to worry about much more than getting a good bit of colour on them. Then I peeled and chopped the sweet potatoes into rough 2cm chunks, made sure they were coated in the hot oil and popped in the oven for about 20 – 30 min. How long it takes to just get the corners start to turn darker will depend on how small you chopped them.

With that in hand, I peeled and roughly chopped the shallots (they’re going to get blended so don’t stress about how fine they are or anything) then peeled and sliced the garlic as finely as I could without risking my fingertips. The last bit of knife work was then carried out on the white potato, which I was including just to bulk it out a bit. With some oil hot in a saucepan big enough for all those ingredients, I chucked in the shallot first to soften then the white potato and garlic to sweat off a for a few minutes. By this point my sweet potatoes were how I wanted them so they went in too, making sure to get any bits from the roasting tray that had caught slightly as they’re full of flavour. The stock cube I found in the back of the cupboard (yes I know I should make my own stock) suggested dissolving in 500ml of water, but I didn’t think I’d need that much so used about 400ml to make it a touch peppier.

With the veg cooked, I topped it up with the stock to simmer for a few minutes. You’re looking for the point when you can comfortably push a blunt knife through any of the chunks but before it all turns to mush. I generally go about a centimetre over the top of the veg, but if you go conservative you can always top up with a bit more after blitzing it. All that’s left is to turn it into a liquid by whatever means you have. I use a stick blender, which generally leaves me with a fetching splatter effect. Any kind of blender, multitool or chopper that seals well will do though. There’s no need to chuck money at anything too specific. That all took about 35 minutes end to end, without needing anything constant attention, and was a delicious healthy lunch for 2 with some Bluebird Bakery bread on the side and a bit of parmesan grated over it for a chuckle.

The point of all this is that there’s really no need to get hung up on weights and measures when you’re just knocking together a quick lunch. There’s no secret or magic and while it’s fair to say there’s a bit of judgement to learn, you’re unlikely to produce something that isn’t perfectly tasty. Yes times are undeniably grim but we still need to eat and more than ever we’re compelled to find joy in small things and cooking is the perfect vehicle for that.