Culture in a car park with the Rose Theatre York 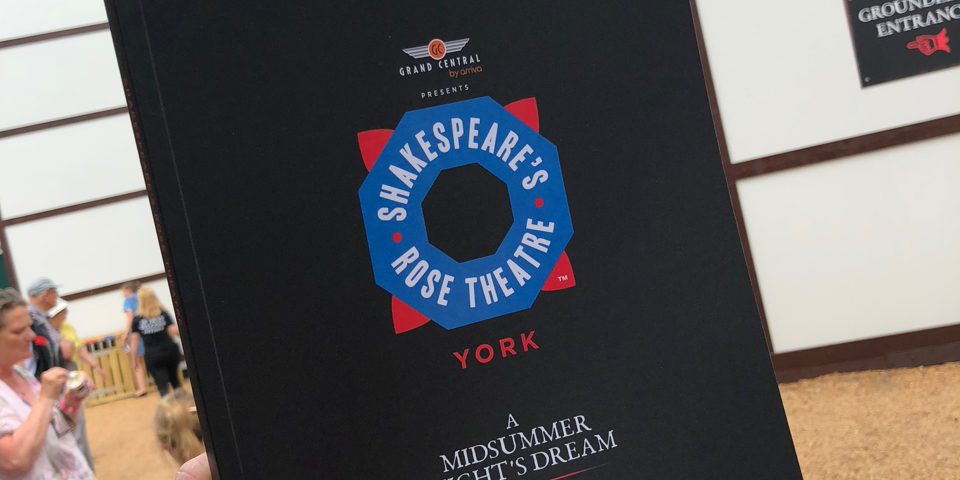 Temporary structures have been something of a theme in York this year, with the Spark container park making headlines. Spark will be in York for at least a couple of years but making a rather more brief appearance in our city is Shakespeare’s Rose Theatre York which has popped up on Castle car park in the shadow of Clifford’s Tower. For as long as I remember, Castle car park has been a pot-holed mess with impractically small spaces that invite the careless to snap off wing mirrors with abandon. Giving a significant section of it over to a the Rose Theatre York can only be a positive thing for York!

The Rose theatre York is constructed of scaffolding but the exterior has been clad to make it more sympathetic to its surroundings, which now include a small village of traders to offer food, drink and merchandise. There are longer term plans in York to reclaim the area around Clifford’s Tower so this is a tantalising glimpse of the potential the area has. In particular, the view across the Elizabethan garden draws one’s eye to aspects of Clifford’s Tower that have previously been all to easy to miss.

The food offering has been curated by Yorkshire born celebrity chef Brian Turner who has plumped for The Mussel Pot and The Yorkshire Pudding Pie Company to take up catering duties. The Mussel Pot is offering its namesake Moules Marinière alongside a burger, a wrap and a couple of other things. I enjoyed the bavette steak sandwich, served on ciabatta, and the mussels that were served with plenty of bread to mop up the sauce. My tip for these is to grab a seat in reach of a bin for easy shell disposal. The Yorkshire Pudding Pie Company have a unique offering that ditches pastry for surprisingly light batter to surround pie fillings. I tried the Wagyu Cheeseburger and Mediterranean veg versions that were great value at four pounds a go. The veg version hit the spot beautifully while the beef was a heftier dish that would have benefitted from a touch more aggressive seasoning though the cheese kicked it forwards nicely.

I wasn’t able to check out all the plays being performed so sent along some willing accomplices to a various performances. With regards food, they reported back that the smoked garlic mushroom dish from the Mussel Pot was tasty but could have been more generous.

The bars have everything you might fancy to help you through the culture, with pleasingly local beers featuring along the usual wines, bubbles and Pimms. Pricing is a little higher than an average city centre bar, but this probably won’t host many extended drinking sessions, so that’s not likely to be an issue for most. The village has a few plastic accoutrements that are fun but aren’t entirely necessary, the plastic pigeons are inoffensive but it was pointed out to me that the fake severed heads over the entrance could be considered in poor taste given the morbid history of Clifford’s Tower.

With regard to the Rose theatre York itself, once inside there’s no masking the temporary nature of the building and its scaffold structure but your eyes are drawn to the stage, which belies the impermanence of the wider construction. The roof of the stage is strikingly decorated and hides a space for the musicians with a sun motif that hides a trapdoor.

Mrs Fork and I were able to attend a matinee performance of A Midsummer Night’s Dream that took place at the beginning of the heat wave we’re still enjoying (or enduring, depending on your preference), giving us the perfect excuse to grab a cold drink from the Village. If memory serves this is the first Shakespeare I’ve seen performed that wasn’t as a precursor to an exam, and I thoroughly enjoyed the experience. While occasionally it felt like the actors were rushing their lines in an attempt to make the Elizabethan language feel more naturally delivered, the pacing felt appropriate and the physical comedy toward the end was well executed, eliciting plenty of laughter from the audience. The trap door in the roof above the stage was put to good use to enable lots of acrobatics throughout the performance that were truly spectacular. It struck me that the experience as a spectator in the groundling area would be rather different to the one we had in the seated area, with the performers roaming through the crowd. I’ll be taking the opportunity to check out this area for a performance of another play.

The feedback I received on the other plays was largely positive,

Claire Davies (The Greedy Wordsmith) said: Approaching through the cramped rows of cars in Clifford’s Tower Car Park, it is difficult to appreciate the hard work involved in erecting the Shakespeare’s Rose theatre. Built in just three months, this twenty first century take on a 17th century structure quickly sets the scene for a night of Machiavellian plotting, murder and, of course, witches.

The walled village surrounding the theatre invites you to forget about the rather ungainly environment just outside. Street performers, food stands and a well-stocked bar make our early arrival all the more enjoyable, and seem to have attracted curious travellers who have just stopped by for a taste of Elizabethan themed tourism.

This performance of Macbeth doesn’t hold back on the gore and violence of civil war and tyranny. The murder of Lady Macduff and her children is dealt with carefully but is, nevertheless, unsettling, and the drawn out assassination of Banquo is equally disturbing.

If you like a traditional take on Macbeth though, this production might not be for you. The weird sisters’ role has been heavily altered, with Cruden attempting to reflect the political culture in which we now live. Equally, I’m not sure that the interpretation goes far enough to appeal to a new, younger audience who might normally be turned off by the weighty language of Shakespeare.

All in all, the experience was positive, with some good performances from the cast. The theatre is impressive and comfortable; the staff genuinely excited to be working in an Elizabethan theatre.

Of Richard III, my delegate summed up as follows: An enjoyable evening and a novel experience. I enjoyed the feel of temporality of the venue and the sense of focus of this dedicated space. I liked the variety and choice of plays (four different ones), plus anything that makes the most of fresh air and the outdoors in summer is a winner for me. If something like this was to return to York, say, every 3-5 years, bringing a different selection of Shakespeare plays each time, it would be a very good thing!

The reporters I sent along to Romeo and Juliet commented that they loved the 1930’s setting and the unique, intimate theatre though expected a little more from the surrounding village. They made the, valid and pragmatic, point that for the evening performances it can get rather chilly. It’s also worth noting that timings for the nearby multi story car park can be tight for the evening performances.

It’s really exciting to see York opening itself up to new developments such as this. We thoroughly enjoyed both the performance we attended and the village that supports it, that we’ve popped back a few times to visit and meet friends speaks volumes. I’m looking forward to getting back and checking out more performances.

Disclaimer: No charge was made for review tickets, opinions are impartial.