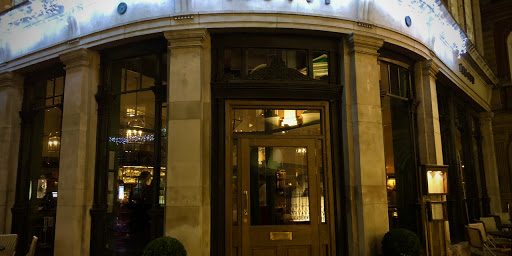 With a significant amount of fanfare, The Ivy arrived recently on St Helen’s Square, adding to that area’s continued emergence as a hotspot of restaurants including Jamie’s Italian and Carluccio’s, not to mention Betty’s and its perpetually attendant queue. The Ivy St Helen’s Square is part of an expansion of the brand that has seen a number of restaurants open in short order in several cities, including Harrogate and Edinburgh, along with a smattering further south. I was invited along to the York venue to check out The Ivy St Helen’s Square experience.

For reasons entirely outside of the restaurant’s control, it didn’t start well. As soon as we’d been greeted and seated by a small flotilla of staff, then presented with menus, my wife realised that her advancing state of pregnancy had rendered her too tired to be able to enjoy a three course meal. After excusing ourselves and adjusting the booking with one of the many understaffing staff, I was back two days later to enjoy an evening that would feature a significant amount more food.

Much has been made of the chef recruitment undertaken by The Ivy in York with numbers north of 50 being bandied about, and that seems to have been matched by an equally spirited front of house recruitment resulting in many pairs of hands to welcome you and spirit your coat away. Following this theme of significant investment, the interior is largely impossible to relate to the outdoor goods shop that previously inhabited this site. The walls are packed with artwork, some of it reflecting York and the surrounding area, while there’s a polite distance left between tables, not least to include space for ice buckets. I was impressed with the staff remembering the issues I’d had on Monday and their enquiries as to Mrs YoaF’s health were genuine and polite (don’t worry, she’s fine).

We started off with a glass of “Ivy Collection” champagne while looking through the menu which, in truth, I’d had plenty of opportunity to peruse having had two visits to anticipate along with my usual habit of forensic dissection in advance. We skipped any snacks, proceeding straight to order starters of scallops and salmon along with a bottle of house white to keep us company. The smartly dressed server arrived with our first courses quickly, both of which were classically presented. My scallops came on a bed of risoni (indistinguishable from orzo), shot through with truffle, and a few sweet potato crisps for textural variety. It’s clear that The Ivy wants to be seen as a luxury destination and this dish was making every attempt to reflect that in its ingredients. There were plenty of scallops and, while it could be dialled back a little, the truffle didn’t take over the dish thankfully. I was surprised at the simplicity of plating given to the salmon dish: a neat square of salmon sheets sitting under a portion of crab meat mixed with dill cream. After using the muslin-wrapped slice of lemon to season the meat, I was reassured to find good quality salmon, pleasingly solid in texture and smoked to just the right point of moisture extraction.

Inadvertently, we’d opted for more seafood in both of the main courses, with swordfish and cod being delivered along with regular top ups from the bottle of wine that arrived at suitable intervals, an action you’d not expect to perform yourself in this environment. My swordfish was competently cooked, streaked with griddle marks at right angles while sitting on a bed of fregola (pasta presented similarly to giant coucous) which livened itself up with a seam of black olive. The cod was presented with baby pak choi and and shaved radish along with plenty of yuzu-infused mayonnaise, which I felt a little less than convincing, and could have done with another colour to break up the plate. It felt fair to characterise this as a competent rather than memorable dish as we paused for breath before dessert.

As always, I found the spectacle of a friendly server being made subservient by scraping my crumbs into their hand a little uncomfortable, but we happily ended the meal with a creme brûlée and a flourless cappuccino cake. The bill for all this, including tip, was nudging a hundred pounds. While this was in part due to the champagne at nearly £10 a glass it’s clear that all this attention comes at a price. If you want to check out The Ivy with a more restrained wallet then there’s also a set menu that’ll set you back a much more modest £16.50 for two courses.

The Ivy has hit its stride quickly in York, offering an opportunity to bask in attentive service and the feeling of event dining while enjoying good food. I don’t doubt it’ll be well established in the York food world in the very near future.