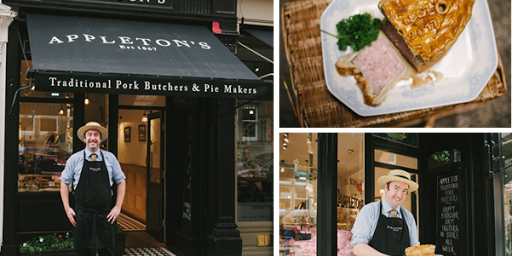 Appleton’s Butchers, who recently opened a shop in central York, celebrate their 150th anniversary this year. The family owned butchers, who have shops in Ripon, Boroughbridge, Wetherby and York, have created a one of a kind celebration pie, using York ham and rose veal. The pie will be available to customers from Monday 14th to Friday 18th August to kick off Appleton’s anniversary celebrations.

Established in Ripon in 1867, Appleton’s are best-known for their handmade pork pies, which have locals queuing round Ripon’s market square, and are beloved by Prince Charles.

The anniversary pie is made in a traditional game pie mould with hand raised pastry, locally sourced rose veal and York ham produced from Appleton’s own pigs, which are reared on the family farm in Ripon.

Last year Appleton’s opened a shop in York, returning a traditional pork butcher to the city walls for the first time in years. Since opening, the family behind Appleton’s now rear their own Yorkshire pigs on their farm and have produced their first home reared York Ham. Dry salted in two stages and air dried for two months before being cooked, it’s the quintessential British ham, with a distinctive pear shape and delicious fatty covering.

Owner Anthony Sterne said “Reaching our 150th anniversary is a very proud moment for Appleton’s. Despite the sad decline of many butcher’s shops in Britain in the past few years, we are lucky to be supported by fantastic loyal customers, who come to Appleton’s for high welfare local meat, prepared with care and great service. We have created the anniversary pie using a recipe resurrected from the Appleton’s vaults, and we hope many of our customers will join in our celebrations and try it this week.”

Jelly
If you can get a couple of pigs trotters add them to the ham cooking water with an onion, carrot and bouquet garni. Skim the surface during cooking to remove any scum and strain once the ham has been removed. Once cooled this should set.

Alternatively add gelatine leaves or powder to the ham stock according to the packet instructions once the ham has been removed and the stock strained.

You’ll need about ½ pint of jelly for the pie.

To make the pastry crumb 100g of lard into the plain flour and salt using your fingertips. Melt the remaining 170g lard in a saucepan over a low flame. It should be hot enough that when you flick a drop of water into the lard it sizzles. Boil 170ml water in a separate pan. Using a tabletop mixer fitted with a dough hook (or a large heatproof bowl and wooden spoon) gradually add the hot lard and boiling water to the flour mixing vigorously until all the water is thoroughly mixed in.

The pastry should cool for a good hour before using although it’s best not letting it get too cold.

To make the filling chop everything up into small pieces (1cm cubes) and mix together.

To assemble the pie take ¾ of the pastry and roll into a ball. Place in the bottom of the pie tin and carefully but firmly flatten out over the bottom and sides of the tin using your fingers. Try and ensure an even thickness and plug any cracks with more pastry. The ends of the pastry should hang over the lip of the tin. Now put the tin in the fridge for 20 minutes for the pastry to harden.

Meanwhile roll out the remaining ¼ of the pastry to form the lid.

Put the pie filling into the tin using wet hands to stop it sticking and tamping down to avoid any air pockets. The filling should be domed above the sides of the tin. Brush the pastry rim with water and place the lid on top. Cut off excess pastry and crimp. Decorate if you like and cut in a hole in which you can pour the jelly. Brush with an egg yolk and water glaze.

Bake at 190oC for 20 minutes then turn the oven down to 160 oC for a further 30 minutes until the pie is an even, golden colour.

Cool for at least 30 mins before carefully taking out of the pie tin. Cool for a further hour at least, before filling with warm jelly.

Entrants must be resident in the UK and be available to meet Ben Thorpe at Appleton’s Butchers Lendal week commencing 21st August 2017 to collect their prize in person and be photographed.

The prize is a voucher for £50 to be used against a purchase or purchases at Appleton’s Butchers Lendal by voucher end date. Not to be used in conjunction with any other offer. No cash alternative.

Winner selected at random by Ben Thorpe from eligible entrants on Saturday 19th August and the winner will be informed by direct message on Facebook and their name will be published on York on a Fork’s Facebook page and Twitter feed.

Entries will not be accepted from employees of Appleton’s or of Lemonzest PR.

Promoter is Ben Thorpe, trading as York on a Fork.