Taking a butchers at some BBQ with Andy Annat 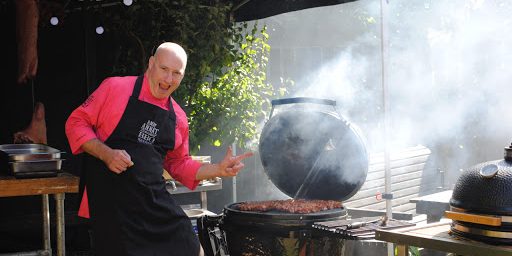 If you’ve been following this blog for a while, you might be familiar with Andy Annat from his pop ups in Knaresborough and stint upstairs at the Blues Bar in Harrogate. Andy’s now made his exit from the Blues Bar and is plying his trade around the country, bbqing with his spectacular Wall of Fire when there’s space, and always delivering bags of flavour. Recently, Andy had a rare weekend off, so put on a day of butchery and BBQ that promised plenty of food, demonstrations and chances to get hands on.

The course took place at Andy Annat’s house, the garden of which was predictably rammed with BBQ equipment. A pizza oven and tandoor supplemented the four other BBQs that were up and running when we arrived, one of which was gently smoking away with a pork joint to be ready later, while another was packed with bacon ready to get the day underway with breakfast, over which we met the rest of the course’s attendees.

After a first burst of butchery demonstration we set about making sausages, with two of the group co-opted into mixing their own sausage meat and using a sausage machine to stuff their sausages while the activity was accompanied by many double entendres and bad jokes. After realising that making up strings of sausages isn’t as easy as Andy Annat makes it look, we moved into a chat about the relative merits of cooking on planks against salt blocks. With examples of both of those in place on one of the BBQs, I set about making up some bacon-wrapped onion rings to contribute toward lunch, which would also feature “dirty steaks”.

We were cooking with natural lump wood charcoal, so we had no worries about it being adulterated with any accelerant or chemical, and that meant that we could just throw a bunch of steaks directly onto the coals. After a decent interval for them to take on some smoke, they just needed the coals knocking off and a coating of Bovril butter to bring out the quality of the meat. With that done, we were ready to serve up lunch and get stuck into the fruits of the morning’s work and enjoy fantastically cooked examples of everything I’ve talked about along with a selection of salads and some maple- and pecan-drenched sweet potatoes that had been cooked in the coals.

The afternoon was spent over a series of more butchery demonstrations that showed, in great detail, where particular cuts of meat come from, along with more chats about technique and the BBQ scene in the UK and around the world. Andy has some cracking anecdotes to share too that I don’t doubt are, deservedly, well practised. If you have the chance, ask him the one about armed response intervention and the Queen, or about messing with a prominent food critic’s potatoes on live TV.

The day continued at breakneck speed, taking in mackerel, BBQ Yorkshire puddings, BBQ garlic flatbread, lemons injected with butter and slow smoked pork that had been cooking in the background all day. With the need for something sweet to complete proceedings, a bunch of pineapple strips were covered in rum, cinnamon and sweetness before being seared and served.

The cost of the day was £120 and included your apron from the day, all you could eat through the day and all you could drink from the cask of local real ale squatting in the corner from which you could serve yourself. That’s a complete bargain if taken in isolation, and even more so if compared to other well known local cookery schools. The next course will be a BBQ take on “The 12 days of Christmas”, which sounds like a suitably left field subject for a day with Andy Annat. I’ll be checking my penny jar…