James Martin on a train! 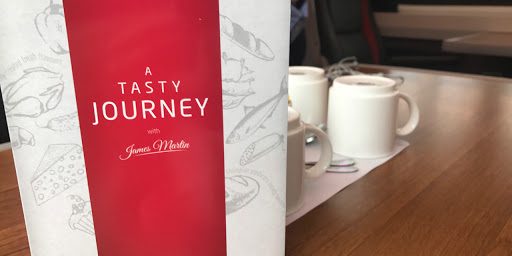 James Martin on a train

First class rail travel isn’t something I’m particularly familiar with, the perception of high costs firmly wedged in my mind, so it was with some anticipation that I sat in York station with appetite ready engaged for the breakfast that the journey to London would offer, despite the early start. After getting myself comfortable and heading off that early start with several cups of coffee, I accepted the offer of a full English breakfast and cracked on with some work, noting that train wifi speeds have taken a decent upturn since the last time I attempted to make them work.

Breakfast punctuated the journey well and impressed; there was no hint of compromise on the plate and the ingredients were all good quality. Working on a train must be challenging for a chef so getting a well judged fried egg onto a plate without scalding oneself is a small feat in itself. The black pudding drew particular compliment from both myself and my companion.

Before long, we were enjoying more complementary refreshments in the Kings Cross first class lounge while we waited for Mr Martin to join us for the return leg of our journey. The lounge is squirrelled away from the bustle of the station (let us never forget how huge an improvement the new Kings Cross station is on its predecessor) and gives easy access to the platforms, which our party took advantage of to get ourselves back into another relaxed first class carriage.

Thankfully, my companions for the journey were as inquisitive about food as me so we ended up ordering a good selection of the dishes to be prepared while we were joined by James Martin himself for a wide ranging chat about his involvement with Virgin East Coast and the food on board.

It doesn’t take a lot of imagination to consider how much effort it would take to scale up a single dish from one’s own kitchen to be able to offer it consistently to an entire train service, let alone taking into account the space limitations inherent in cooking on a train. James talked with great candour about the challenges of developing dishes that can be reliably produced on this scale, starting with small test batches and working toward ever larger runs that number well into five figure digits. One can only imagine the dreadful sinking feeling to be endured on the rare occasions these runs go wrong, though James was keen to reinforce that even if the taste is off, there are various other ways to make sure the food isn’t wasted and it makes its way back into the food chain.

As the conversation moved onto sourcing, we touched upon another of James’ passions. That superb black pudding (no, it’s not for sale to the public) comes from Laverstoke Park, founded by Ferrari’s 1979 F1 world champion Jody Scheckter with the intention of providing the highest quality produce, farmed without compromise. It was nice to see a good Yorkshire beer on the menu too, with “Hop on Board” coming from Rudgate brewery as an exclusive offering for Virgin East Coast. Our conversation then had to work around our appetites for a while, talking with one’s mouth full perhaps less of an offence when the conversation is with the chef who developed the dish.

I grabbed one of those Rudgate beers to find it complemented my chicken curry very well while mac’ cheese and gourmet sausage rolls also appeared at the table along with frequent offers of more drinks and snacks. The curry had more bite to it than I expected and came with a small naan and portion of rice that added up to a sensible quantity. The mac’ cheese came with a crunchy topping that drew admiring glances from the table while the sausage roll was also James’ choice for a snack that offered crispy pastry and soft, high quality, meat.

Before long, we were back in York having taken up over an hour of James’ time, covering subjects as diverse as shoe fashion, air pressure controlled kitchens, celebrity stag do’s and the local restaurant scene. It was abundantly clear from both conversation and final offering that James has found a clear route to navigate the cost and logistical compromises inherent in offering good food on a train to suit both first and standard class pockets.

I’d approached the day curious to see how good food cooked on a train could be and how much I’d be willing to part with more money to travel first class in future. On the first point the food exceeded my expectations at every turn and, as for future travel, I’ve just booked first class tickets for the next train journey I have planned.

You can find more information about travelling, and eating, in first class with Virgin East Coast here: https://www.virgintrainseastcoast.com/the-east-coast-experience/first-class/complimentary-food-and-drink/

This post is sponsored by Virgin East Coast Trains