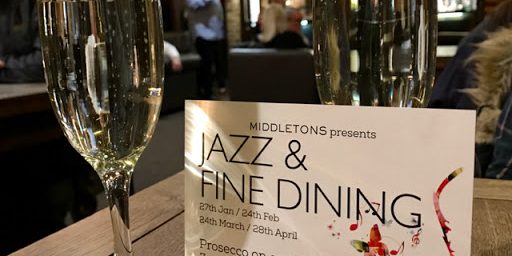 Middletons Hotel is a collection of six listed buildings just a stone’s throw from Skeldergate; close enough to the centre of town to be enormously convenient for guests in our wonderful city, but set back far enough from the road to deliver on its promises of a quiet retreat from the bustling city centre. As a location, it leant itself wonderfully to my wedding a couple of years ago, so it’s retained a special place in my heart, good memories of which were called to the fore when we were invited to attend a Jazz night at Middletons Hotel.

These evenings take place on the last Friday of the month and offer a relaxed few hours in the presence of a talented gypsy jazz band along with a glass of prosseco when you arrive and a three-course meal throughout the evening. Tickets are limited to make sure that the ambience isn’t ruined by overcrowding.

One of the challenges of holding an evening like this is keeping service synchronised to allow all the guests to receive their courses at the same time. So it was with some relief that as we finished our fizz, the starters arrived promptly while the band introduced themselves as Rendez Manouche. These guys are affiliated with the Arts Barge project and bring with them a double bass, a clarinet and a couple of guitars, but crucially leave behind any electrical amplification in this venue to make sure that the sound is both natural and only as invasive as it should be, allaying concerns I had about the music overwhelming the food element of the evening. The music they brought forth throughout the evening was fantastic, bringing a sense of fun way beyond ‘just’ background music.

Starters were Jerusalem artichoke and turnip soup with scallops and house-smoked duck breast with caramelised hazelnuts and black
garlic mayo. Both of these were well balanced with the smoking of the duck in particular perfectly judged. While the black plate was strikingly shiny, I felt like it detracted ever so slightly from some of the colour on the plate. Putting aside minor aesthetic considerations, the room, music and food came together nicely to set the evening up.

Our previously selected mains of sea bass with crab potato rosti and mussel, and ham and tomato soup and Game casserole with dark chocolate, juniper berries and new potatoes followed after a short interval that the band filled masterfully. The pick of the two was the sea bass dish; the crab potato rosti was particularly marvellous in its use of crab to sweeten the portion. The portion of game casserole was generously meated and rich with two halved new potatoes studding the bowl. A few sprigs of something green would have been a nice addition to breaking up the main colour on the plate, but the flavour was all happily in place.

With the Jazz night at Middletons Hotel progressing nicely, we set about rounding things off by way of Earl Grey rice pudding with poached winter fruits and apple tart with crème patisserie for dessert. The apple was generous and pastry first rate and though the rice pudding had a touch of crunch that it shouldn’t have, the flavour was spot on though with the tea sitting around the edge of the flavour.

The evening was extremely well judged with the combination of music, setting and food coming together to create a lovely atmosphere. The band hit all the right notes (so to speak) and even sneaked in a cantina band riff that made me chuckle while never overwhelming the evening. Thirty five pounds for three courses of good food, a drink and music is a pretty compelling number.

Disclaimer: We were offered complimentary food in return for this feature, which is impartial