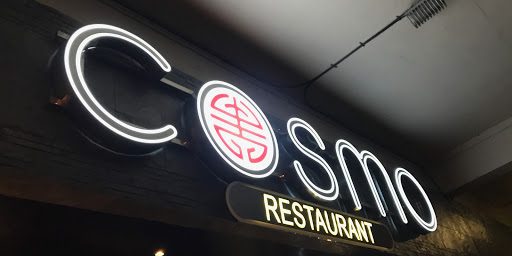 I can admit to a degree of indecisiveness on some occasions, scrolling through the TV planner until there’s no time left to watch anything or needlessly coming up with too many potential options for taking care of leftover mince until paralysed by choice. But generally, it’s not an issue that comes up when deciding what cuisine will be on the agenda for a meal out. I certainly don’t recall any situation in which I’ve been so captured by indecision that I’ve required a huge variety of cuisine choice available after my arrival at a place to eat. That though is exactly what’s on offer at Cosmo, with a huge range of possibilities available to either compliment or clash to your heart’s delight.

The range of cuisines on offer really is very wide, taking in Indian, Italian, Sushi, Carvery, Teppanyaki and Asian alongside various deli style options and desserts. It seems that the real challenge in running a restaurant of this style is to keep the quality of all those options at an acceptable standard and the quantities available topped up. After a pleasant explanation from our server of practicalities such as where to collect fresh plates and so on we took our table before making our first trip to fill our plates.

Starting at the Asian counter, I grabbed a modest selection of prawn tempura, duck pancake and a steamed bun with an eye on maintaining enough appetite to sample as much as possible. Perhaps the signing was a little off, but I immediately committed an error in picking up a custard steamed bun, introducing a nice note of dissonance by starting with a dessert item. Still, everything was nicely prepared even if I was eating it in the wrong order. Sticking on the same side of the globe, I next approached the teppanyaki bar to request scallops and calamari be freshly prepared for me. The queue for the teppanyaki grill was entirely justified by the fresh preparation and the resulting seafood. The only hiccup here was in selecting a sauce from the illegible signing.

The next few plates came and went with various selections of pizza, pasta, ribs, shredded pork, stir fry and curry all joined by their regional sidekicks while we revealed a distinct lack of artistry in our plating skills that you can see in the pictures below.

After working our way through the wide variety of savouries, omitting carvery and noodle bar for the sake of both waistline and sanity, we moved on to looking at desserts. Guess what? There was a large range on offer! I can tell you’re shocked. With not much space left, I ignored the Eton Mess, eclairs, brownies and jelly to just opt for a shot glass of chocolate. Grace however, being more game than me, helped herself to ice cream, fruit and sweets alongside marshmallows showered in chocolate. Before lapsing into sugary unconsciousness, she made positive noises about it all.

It’s both true and slightly churlish to point out that all of the styles on offer here can be found produced to a higher standard in other places around York, with the possible exception of teppanyaki, but there’s no denying the value on offer here. Kids were sliding about the place on heelies, indulging in whatever obscure combination took their fancy before taking advantage of the chocolate fountain, while grown ups were able to stick to rather more traditional combinations and order from the sensibly priced drinks menu. With the most expensive dinner option coming in at £17 per adult, it’s hard to argue with the value and we certainly enjoyed our meal and the decision making that went along with it!