All you want to eat with Veeno (closed) 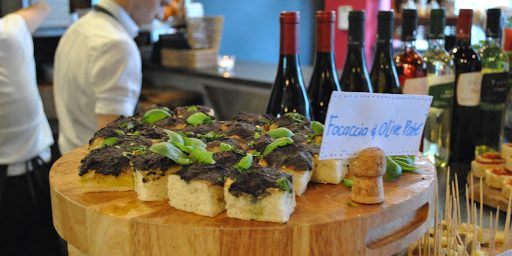 York on a Fork has been a fan of Veeno for a little while now. Good value wine of a consistently high standard with free meat and cheese? What’s not to love? In fact it’s become a favourite spot for YoaF planning meetings for exactly those reasons. So when I was invited to come and try out the Wednesday Apericena, I leapt at the chance to cross that off the list I’d had it notionally on for some time.

In this country we’re rubbish at going for a quick drink after work, or rather too good at it. It’s well documented that us Brits are useless at adopting the cafe culture of our continental counterparts, preferring instead to inadvertently end up trying to maintain the structural integrity of a dubious kebab. Apericena is the polar opposite of that. Unlimited Italian food including dessert and a glass of wine timed to coincide with office workers exodus, it has all the signs of imposing civility on its guests.

Seven quid gets you signed up to the Veeno buffet and a glass in your hand, a quid more makes that a large glass. I’d expect to pay five pounds for a glass of any drinkable wine in a town centre venue so by that reckoning you’re paying 2 (or 3) pounds for your dinner, which for that price must surely be awful?

Nope. Platters of olive tapenade on focaccia, rice and pasta salads, tuna bites and pecorino were forthcoming and regularly topped up until everyone was sated. Admittedly nothing about it was flashy or obviously expensive, but everything was well executed and tasty. A more ostentatious offering would knock the price up, remove the spontaneity of organising a gathering here and change the dynamic of the socialising, so I think this is right on the mark. Cream and strawberries came out for dessert as things were starting to wrap up, again simple but not overstated.

The only thing I would pick fault with is the Veeno plates. I was tempted to go the full Partridge and bring my own plate to replace the glorified coasters that were provided. I’ve no idea if this was a conscious effort to try and minimise people’s gluttonous urges, but if so it was unnecessary, the clientele displaying continental levels of moderation.

I’ll certainly be back, though not as soon as I’d hoped. Rather frustratingly Mrs YoaF has cast me aside tomorrow night in favour of taking a few friends there. Guess I’ll have to wait, serves me right for shouting about it.