The Star Inn the City 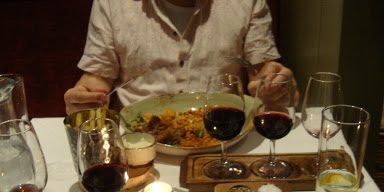 One of the newest and most exciting/media-baiting additions to York’s food scene is the Star Inn The City. Its parent restaurant, The Star at Harome, has a distinguished history of culinary excellence under the stewardship of Andrew Pern but has suffered the relative indignity of losing its Michelin star in recent years. I first ate there *some years ago* on my 30th birthday and it’s been a favourite since then, even hosting a marvellous wedding barbecue for a friend. The concept of a modernised, urban sophisticate Star in a striking setting is very compelling…

…But prior to my visit I’d heard very mixed reports on the service and whether or not the food represents value for money. For the record, I’m happy to pay lots for a meal if it’s truly superb – I think I’ve ticked 5 Michelin stars so far and don’t think i’m too tight fisted, but York has a lot of excellent ‘cheap’ privately-owned places that make some of the more mainstream options look poor value. However, comments from those whose opinions I trust seemed largely positive, so clearly it was time to make an excuse and visit.

The Star is set in a heavily renovated pump house on the banks of the Ouse at the base of Museum Gardens and is surely one of the most well thought-out and neatly-integrated modern examples of repurposing to be seen in the centre of town, it’s a pleasure to descend from the edge of Lendal Bridge, through the arch and past the chiminea on your way to snoop at the menu.

I’ve only enjoyed one meal and one breakfast to date at the Star. For the evening meal after being seated promptly we took stock of the menus that opened up many avenues toward culinary satisfaction.

Starting with a Beef Carpaccio and Prawn Cocktail we found the beef beautifully tender and well seasoned and the prawn cocktail pleasingly meaty, striking the perfect balance between tarte bloody mary-infused sauce and crunchy, refreshing lettuce.

Moving onto the mains we picked confit duck with home baked beans and a ribeye steak. The duck was thankfully not dried out, retaining a moist core and beautifully crisped skin while the steak was presented almost as rare as we wanted – maybe it should have been requested blue, but certainly nothing to complain about. One notable eccentricity was the parmesan crisps that seemed to accompany most dishes. They were certainly moreish, but didn’t always complement the flavours they were presented with; the saltiness mainly triggered a request for another jug of water.

To finish we took a plate of cheese served at the perfect temperature and with a suitable quantity and selection of accompaniments (unlike some other upmarket restaurants in York, who seem intent on finding their own Mr Creosote).

We stumbled away into a misty night in York contemplating our waistlines and when we could justify a return. Early kinks in the service seem to have been ironed out and the food we were served was of a consistently high standard. If I were churlish, I could talk about the couple at the table next to us, who seemingly attracted by the latest tinselly opening in town were intent on talking sullenly about how expensive their lagers were, but the Star was a lovely place to be and a lovely place to eat. Certainly not cheap but I certainly wouldn’t accuse it of being poor value. With J Bakers’ exit, there’s a vacancy for sensibly-priced good food in the centre of York. Adding in the riverside location, the Star is onto a winner.

…Fast forward a few months and we find ourselves needing to reward a slightly perverse friend who insisted she’d enjoy painting some skirting boards for us. After a few hours of watching her seem to enjoy holding a brush we dragged her off to buy breakfast. Between eggs benedict, eggs with spinach and a pancake stack we certainly made the most of the excuse. The pancakes were accompanied by beautifully thick rashers of bacon without a hint of being aggressively salted and the maple syrup inspired a (unrequited) interest in a second round.

What sort of group would you recommend this for?
Foodie friends who don’t mind paying for good food and nice surroundings. pleasant brunch in town.

How much did it cost?
About a hundred and thirty quid for two starters, two mains, cheese plate to share and two flights of red wine. Thirty quid for breakfast for three including coffees.

How many times have you been?
Dinner, breakfast and a quick coffee on the terrace immediately after opening, at which point it has to be said they were on cash payments only. Not a problem for a coffee but having to excuse myself to find a cash point if on a larger meal would have been awkward.

Are you going again?
Yup. As soon as I’ve even half a decent excuse.

Any other points to note?

GIles Coren had some thoughts on the place if you’d like to make your way through The Times paywall. http://www.thetimes.co.uk/tto/magazine/article3987352.ece