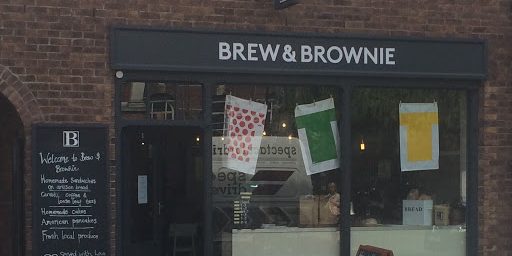 It’s not hard to find a good cup of coffee in York. Award-winning baristas abound amongst quirky independent coffee shops all successfully chiselling out their own niche. Perky, Spring, Harlequins, Kafeneion and others all find a happy clientele while begging questions of those frequenting the chain coffee shops that otherwise overpopulate our towns. One of the newer additions to this scene is Brew and Brownie, who are (roughly now) celebrating their first anniversary. Slickly presented, friendly and comfortable, all the omens are good. With a year of service under its belt and a growing reputation, we felt lucky to get a table on a weekday morning, mindful of reports from friends bemoaning their inability to get a table at 11 on a Saturday morning!

Quirkily decorated without pretension, everything feels functional without giving way to style over substance. Cute old cinema seats in particular make an appearance. The brown paper aesthetic of the menu fits in neatly!

Americano, toast with peanut butter and scrambled eggs with smoked salmon appeared after a short interval. The chunks of unscrambled yolk raised a few questions about how much time was given over to the actual scrambling but being perfectly seasoned and generously festooned with smoked salmon made things more than right. A patty of neatly presented butter accompanied toast with peanut butter for my companion as we both appreciated the Haxby Bakehouse bread.

If pushed I’d ask for a slightly ‘softer’ tasting coffee, the default being a touch harsh for my taste (I can’t abide milk in coffee so perhaps notice minor variations more. or am fussy) and a touch smaller portion but there’s no reason Brew and Brownie shouldn’t be one of York’s many default breakfast/coffee/elevenses/coffee choices. Here’s to many more years of success!