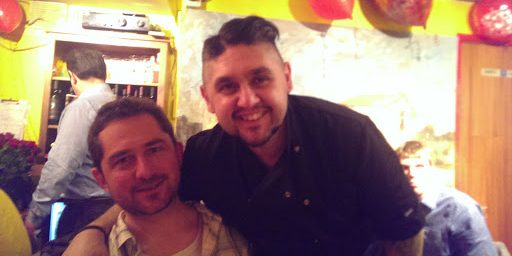 Il Paradiso del Cibo da Paolo is lumbered with a few issues, not least of which is a slightly unwieldy name, but it’s always one of the first suggestions to come from York’s food fans when interrogated for a recommendation (can anyone recommend a good Italian…?).

Presided over by Paolo Silesu, whose painting takes care of things when he’s absent in person, Paolo’s provides an intimate, bustling environment where it’s all about the food. It’s crowded, loud, only takes cash, the tv showing football & Italian adverts is never off and the waiters are pretty much guaranteed to flirt with any women….but none of that is a bad thing. Paolos has character, in spades, and it’s all the better for it. Flirtatious or friendly, loud or buzzing, crowded or appreciated. You can read all of these traits different ways, but for card payments not being accepted is a pain for those of us with less than a ten minute planning horizon.

The core of the Il Paradiso del Cibo menu offers Italian staples such as pizzas, risottos and traditional pasta dishes which are all of a high standard. The meat cannelloni (served at well above the temperature of the sun) gives up a pleasing mix of pork and beef wrapped in freshly made pasta, the pizzas are served with beautiful thin bases and the spaghetti dishes hit the spot.

It’d be fantastic to be able to stroll into the restaurant and grab a cheap & quick single course dinner but the following that Paolo has picked up makes that pretty much impossible (that said, I did exactly that on the Tuesday following a bank holiday Monday recently) so, since you’ll have to book in advance, I think the specials board is where the real attraction lies. Lobster dishes, grilled sardine starters, marinated fillet steak, cozze e vongole and plenty of other delicacies fight for attention. If you’ve been a few times and showed interest you might even be offered something off menu: the marinated wild boar and fresh pasta we accepted once was absolutely wonderful, well living up to the hyperbolic descriptions tossed out by the waiting staff.

On the subject of off-menu ordering, with a bit of notice, I’ve had some fantastic set menus put in front of me here. Beautiful cured meats, olives, vegetables and cheese antipasti followed by seafood dishes of king prawns and mussels and a delicate ravioli filled with pumpkin, biscotti and amaretto, followed up with slow roasted lamb or pork, on different occasions. These have been wonderfully satisfying meals. When I’ve organised these things for fussy colleagues it’s not been a problem to substitute intimidating crustaceans for middle of the road pasta so there’s no barrier to a group’s enjoyment.

Moving on to drink and I struggle to tell you what I’ve been served here because I accept whatever’s offered relative to the expense of the meal. Points of consideration are that the house red is a litre bottle and that house wine by the glass doesn’t scrape much over three quid a go. With admirable honesty I’ve been asked if I’d like the “normal stuff” or the “good wine”….and I can’t say I’ve any indication that was a bill inflation ruse. Mandatory limoncello at the end of a meal is utterly unnecessary though.

So in summary…you need to book, which makes it tricky for a quick cheap meal that would otherwise be a mainstay, but the food is great. Fresh, honest, bold, rustic, friendly, absolutely not elitist and great value….everything you’d say about the venue. Yes, the waiters have pinched my cheeks for being dumb enough to ask for a table without a reservation, it’s too hot, very busy, very loud and you need to remember to bring cash, but Paolos is a staple of York’s dining scene for very, very good reason