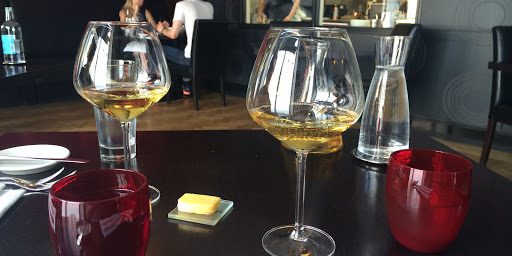 In some corners of the internet there exists a phenomenon called ‘Man Maths’. This slightly contrived and gender specific phrase refers to the internal monologue used to justify slightly silly, but not utterly ridiculous, purchases. Typical example: finance deal on a new boring hatchback ca £150/month versus 15 year old Saab Turbo bought £695 outright. Therefore, five months is the break even point for driving a faster car with minimal depreciation and no worries about car park dings. Obvious isn’t it? Extravagant logic like this may explain the purchase of a 18 year old Jaguar outside my house that’s currently for sale.

Continuing our motoring theme, we were invited south to the wedding celebration of @frontseatphil who runs www.frontseatdriver.co.uk and who took the matrimonial plunge on a recent road trip across Route 66. Returning to the UK, a celebration was duly organised near Cambridge. Coincidentally Cambridge contains two (and more I’m certain) superb restaurants in Alimentum and Midsummer House. Even my flimsy logic couldn’t push us into a ten course tasting menu but surely if we were that close to Cambridge, skipping Alimentum’s fixed price menu would be a terrible oversight?

Table booked and a hundred and seventy miles spent sweating in that old Jag (Note – cheap cars are fine, lack of air con less so when coupled with leather) we were making the call to head to the restaurant half an hour early on the basis that it’d have air con. Luckily we were gratefully received into the bar and furnished with cold drinks and menus by the welcoming staff.

Food orders suitably dispensed we took up our table and received a carafe of tempranillo blanco from Rioja along with snacks to get us going. Mini cheese scones were a relative disappointment compared to the stunningly light cheese pastry balls passed to us on our last, rather more extravagant, visit but the light crisps with pea and feta elicited all the right noises.

The starters felt a touch underwhelming on first inspection. Certainly nothing to question in the quality of ingredients; sardines presented on neatly colour-contrasting tomato slices with pine nuts and lumps of mozzarella all showed consideration. While the duck croquette was a touch bland in itself, it was less so when cut with the beautiful red onion accompaniment.

Things improved markedly with the main courses to meet our, admittedly very high, expectations. Pigeon ballontine was moist and cooked to perfection, beautifully complimented by wild mushroom and red cabbage while a perfectly textured piece of plaice made the most of its brown shrimp and sauté potato accompaniment. Courgette, samphire and smears of delicate flavourings made the most of the fish.

The cheese trolley was a trove of delights from which we took a selection of six. I was particularly impressed with the Morbiere and the Brie de Meaux while my partner was hard to separate from the ewes milk cheese covered in juniper and herbs.

We’d tried to make this a relatively budget meal by sticking to the fixed price menu but were pleasingly surprised with a £60 bill until we realised the wine was missing. Owning up on that front, we settled on £90 including tip, pretty fair for a place sporting that Michelin star.

The thing is, after spending all that, maybe it would have made more sense to spend a bit more and go the whole hog and go for the tasting menu? In this case time was the limiting factor but if you’re going to spring a hundred quid for a meal, why not go crazy and see what the chef really wants to envisage for you. Or would that be more man maths and a self indulgence, the equivalent of an old Jag sitting outside your house for no particular purpose, even if it does go fast and make a really cool noise?