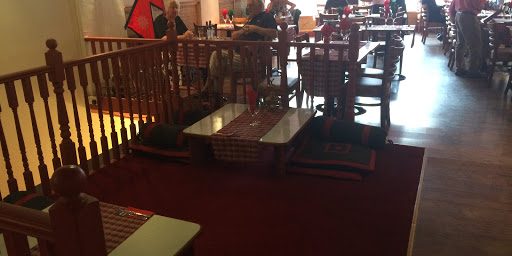 The north of England is hardly awash with Nepalese cuisine. My rather half-hearted attempts to find any other than York’s Yak and Yeti turned up nowhere more northerly than Birmingham, so we certainly should be counting ourselves lucky with this entry. If you’ve the patience to run through more than three pages of Google results, feel free to correct me. The Yak and Yeti occupies a space vacated by The Siam House Thai restaurant on Goodramgate. I’m not sure of its origins, but perhaps we owe its presence in our city to the Gurkha squadron based at Imphal Barracks in York.

Initial reports I heard in the early days of their opening weren’t massively encouraging but a very positive review from a colleague of my fiancé prompted a scan of Tripadvisor (always read the worst reviews, they’re probably no more accurate but more likely to be funny) which seemed to confirm this assessment via a series of recent glowing reviews.

Initially planning a quick meal for two before a Bar Billiards match, plans were expanded to also include a couple of team mates, one of whom I asked to book. We arrived a little out of breath as the booking was made for ten minutes after we left the office and also to include an extra seat “just in case”. Climbing the stairs to the restaurant from the unobtrusive entrance (now signposted rather more obviously than previously) I tried to remember what the place had looked like under its previous occupants…but failed. The Siam House was perfectly passable, but we were to find an experience surpassing that stewardship of the venue.

A comfortable looking seating area with cushions and rugs greets you at the opening of a long, open room that’s flooded with light from the huge window overlooking Goodramgate, responsible for the sun being in my eyes for much of the meal. A fellow blogger mentioned that when she visited, she was so drunk all she could remember was the dodgy décor. While it would benefit from fancying up a bit, I’m not sure I’d go as far as to say it was dodgy. Gender stereotyping of priorities perhaps, I once lived in a house for three years before I noticed the walls were different colours above and below the dado rail.

We were in a bit of a hurry to get to that Bar Billiards match at the Fulford Arms so asked for starters and mains to be delivered all together. It took a little bit of time to catch a waiter’s eye initially, but service for the rest of the meal was spot on and deserving of the large tip our poor maths would later prompt.

Poppadums were complimentary and served with an unidentified tomato-based dip that, while not as flavoursome as what was to come, served its purpose in moistening the crisps perfectly adequately. For starters we went for vegetable pakora, lamb momo and lamb kebab. The pakora was a very pleasant surprise as on intial inspection it looked like it might be a touch heavy, but the batter encompassing the shredded vegetables proved light and tasty while the momo was a treat. Reminiscent of gyoza or peirogi, these steamed dumplings were delicately meaty without being overwhelming and something I certainly suggest trying. I’ll be trying the pork and vegetable variants at some point, but perhaps it’d be nice to add a menu option to try all three in a single dish.

The lamb kebab was the one duff note of the meal. While not bad enough to warrant a complaint, the meat was tough when compared with the high standards set elsewhere. Clearly good quality meat and not at all fatty, just a bit overcooked.

Our main courses were chicken curry, lamb curry, Yak & Yeti beef, pork chilli and annapurna (spicy) chicken, all accompanied by Nepalese fried rice cooked in ghee and washed down with Nepali beers. My tolerance for spice in food is fairly pitiful so I was a touch nervous that I’d spend the rest of the evening sweating onto the Billiards table, but the strength was thankfully restrained. While there was enough to provoke interest in the dishes, it wasn’t at the expense of flavour in the case of anything we ordered. It’s worth noting that the portion sizes were smaller than one might expect for curries but unless you’re a glutton, you’ll be fine. What was universally agreed upon was the quality of every dish. Tender meat, sauces that didn’t overwhelm or rely on overssalting for flavour…everything was superb.

My Yak and Yeti Beef exceeded expectations, but I felt the most distinguished dish was the chilli pork my partner ordered. Slightly reminiscent of sweet and sour, but without the cloying acidity or overwhelming flavour, the pork was perfectly cooked. We couldn’t quite put our fingers on all the elements of flavour, both unfamiliar and tantalisingly close to recognition. Both of us will debate who eats the lion’s share of this dish when we return. The more generically-titled curries were excellent also – luckily my authorship of this blog entitles me to dive onto any adjacent plate “just to check” and I would never be disappointed with one of these. Rice was also excellent, complementing the portion sizes to form a good meal.

The final happy surprise was, for once, the bill. £83 to feed five people including three beers and a bottle of wine? Seriously? In retrospect I’m starting to wonder if they missed something off by mistake but unless the magnitude of that hypothetical error was collosal, this was a huge bargain. Unable to figure out a way of dividing the bill without resorting to messing around with convoluted maths or piles of change (despite the presence of a maths teacher) we rounded it up to a hundred quid (told you it was a good tip) and wondered how the evening could even improve further. It really didn’t, we lost that Bar Billiards match.