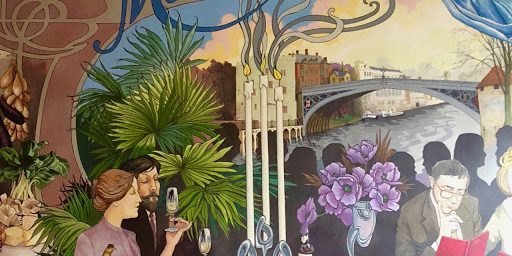 Bishopthorpe Road has been established as one of the nation’s favourite high streets for some time now and continues to find success as a thriving community of largely independent businesses. These days there are plenty of places to eat on the street, but one of the longest serving is Melton’s Bishopthorpe Road, which has been priding itself on offering great food since the 1990’s. In that period, the food scene in York has changed almost beyond recognition, but Melton’s has remained confident in its offering and still has an avid following. It’d been a little while since I visited, so I popped by for lunch recently to confirm everything was still on track.

Melton’s Bishopthorpe Road offers both a la carte and tasting menu options, sidestepping the current debate over whether tasting menus are a frustrating chef’s indulgence or a beautifully curated opportunity to take advantage of a chef’s particular passions and specialisms. For our casual lunch, my dining partner and I stuck to the three course a la carte menu that weighed in at a very reasonable £32, or £28 if two courses is enough.

Melton’s Bishopthorpe Road may describe itself as fine dining, but that doesn’t intimate stuffy interior or service. We were left to happily chat over menu choices while the water we were sticking to came to the table. After a short while, we realised that we would be pushing the kitchen’s service times somewhat with more chat so got our orders in promptly. It goes without saying that no fine dining restaurant worth its crumb scrapers (thankfully absent here) would miss the opportunity to impress with a few snacks to precede the meal. Here we enjoyed some unctuous baba ganoush and crackers before a lamb croquette impressed with a lovely contrast between soft, slow cooked meat and crisped exterior. The last tease was a demitasse cup of wonderful celeriac soup, brought into relief by a sweet apple glaze. Quality bread and butter was also present and correct.

For my first course I took braised celery and gruyere rarebit with walnut, daikon and apple. The intriguing mixture of ingredients and technique turned into a tremendous plate of food. Presented neatly and with restraint, the daikon bracketed by the pieces of celery was a tremendous combination given just enough richness by the gruyere and sharpness by the matchsticks of apple. With walnut giving crunch, this was an exceptionally well balanced dish. The Whitby crab with avocado, peanut and ponzu drew similar praise from the other side of the table.

Any concerns that main courses wouldn’t keep up the standard were quickly dispelled by my beautifully presented guinea fowl breast which arrived perched on a wonderfully fresh mound of spring vegetables. With wild garlic gnocchi and pickled girroles playing support under a coating of hazelnut and truffle pesto, this plate had just enough elements on it to complement one another without beginning to compete for attention. This dish was an object lesson in letting beautiful produce speak for itself while accentuating the flavours of the different elements. Nothing was subjected to any further intervention than that required to let it speak for itself and the cooking of each ingredient was beyond reproach. My companion had plumped for the pork fillet and shoulder which came with artichoke, pineapple and smoked potato; his opinions were similarly high.

To finish the meal, dessert took over the table in the form of a raspberry soufflé and my chocolate parfait. The soufflé certainly looked the part and each part of my parfait continued to speak volumes of the kitchen’s quality. Cumin caramel, caramelised white chocolate and yoghurt all found their voice without ever drowning out one another. We finished with coffee and more snacks while reflecting on what the rest of the day would bring and how dinner would match up.

Thirty two pounds is a paltry sum for food this good, even more so when one considers that coffee is thrown in too. The dining scene in York has become hugely more diverse over the last five years and the increased competition presents an similarly increased danger of being left behind, but I’m very pleased to find that Melton’s is still deserving of its place at York’s top table.