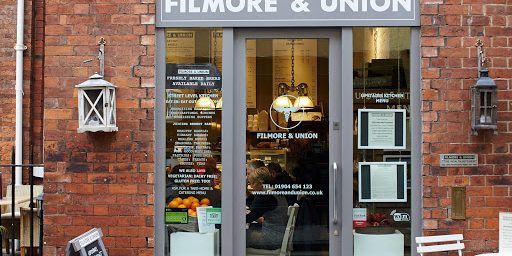 Filmore & Union has enjoyed great success over the last few years as it’s expanded from its original base on Petergate to now include more than ten locations in the region. Filmore & Union York has always put balance at the core of its message, making sure to always be at the forefront of growing awareness around issues such as allergy awareness and sustainability of supply chains. With that ethos central to its identity, it’s hardly a surprise that the menus across all sites offer a broad range of gluten free, vegetarian and vegan options that are complemented by more traditional meat and dairy inclusive options. The Petergate branch may be the original but it’s by no means been forgotten, as shown by the recent refurbishment it’s been treated to. As it’d been sometime since I’d visited, I was more than happy to accept an invitation to go and take a look.

The refurbishment is subtle rather than transformative and most noticeable to me was a rather more well developed kitchen space that sadly removes a classic hidden view of York, all the way down Petergate to the Minster. I can understand the reasoning though, after all, this space needs to function as a restaurant primarily. The furnishing are now understatedly distressed without becoming a distraction; it’s a comfortable place to dine that’s relaxed without feeling too casual.

My companion and I went for vegan walnut pâté and pumpkin & sunblushed tomato gnocchi to start as we enjoyed the unfussy but knowledgeable attentions of our young server. While I’m clearly a meat eater, that’s certainly not to the exclusion of all else, so I succumbed to intrigue when ordering the walnut pâté which was served with beetroot crackers, pickled radish and a sweet kumquat marmalade. The relatively unusual combination worked well as the beetroot let the tangy marmalade and savoury pâté face off against one another toward an admirable truce. The other side of the table found the pumpkin & sun blushed tomato gnocchi pleasingly enhanced with kale pesto that was lightened by a tahini maple dressing that brought the dish together superbly.

After being left for a polite interval during which the table was cleared, our main courses arrived. My friend had gone straight for the meat, choosing the fillet steak with warm winter salad and a mix of potato and celeriac fries, while I stuck with fish, plumping for charcoal cod with celeriac and courgetti. I always feel like steak is a rather high-stakes option (sorry) in anywhere other than a specialist steak restaurant, but everything was in order, the meat cooked exactly as requested and the accompanying vegetables well seasoned and not subjected to any unnecessary interventions. My cod was well cooked and presented on a bed of diced celeriac and courgetti (the relative merits of which I’ll stay away from here). The red cabbage and rose gazpacho that was poured over the dish wasn’t a flavour I’d encountered before and was certainly a bold use of ingredients. The fish had been topped with a small amount of the previously encountered kumquat marmalade that wasn’t needed along with the sweetness of the rose. I enjoyed the dish, but it was certainly an unusual combination of flavours that might not be to everyone’s taste.

To finish the meal, we shared a vegan peanut butter cheesecake that hadn’t lost any of the appropriate sense of indulgence along with its dairy ingredients. Plenty of peanut came through and the right texture was present and correct.

With a couple of glasses of wine thrown, in the bad news came to around £85 plus tip, for two and a half courses each, including that steak to bump up the total a bit. For a well thought out and interesting meal that affords one the confidence of knowing both what’s on the plate and the provenance of the ingredients, that’s certainly not an unreasonable amount to eat at Filmore & Union York.