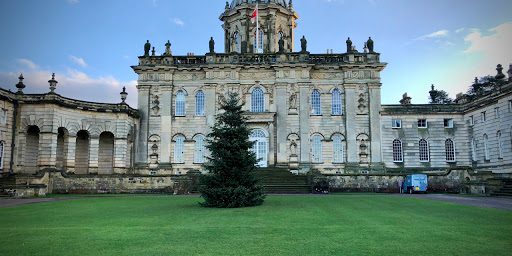 I’ve been to Castle Howard many, many times since I moved to York in 2001. It’s a truly breathtaking building that entirely justifies the many intriguing follies and striking views that the road to it teases you with before you arrive at the main event. Its role as Brideshead in both the 1981 and 2008 adaptations of Evelyn Waugh’s “Brideshead Revisited” guarantee its iconic status as a tourist attraction in Yorkshire but, despiteCastle my affection for the TV adaptation (I’ve never quite found time for the film), I’d not got round to getting myself inside the house until the opportunity arose to sample afternoon tea on the estate and take in the house in the same visit. Time to try visiting Brideshead!

When visiting Brideshead the drive from York takes you past some striking structures (I’ve come close to taking out tourists before, lured into the middle of blind bends for the best camera angles), the most rewarding views of the building come from approaching from the direction of Kirbymoorside. This lets you take in the frontage across the lake over which the building looks, which is visible from some distance in its asymmetric glory. When we arrived on this visit we didn’t linger on the garderns, rather making a beeline for the house to check out its Christmas finery, though both the gardens of the house and the Arboretum nearby merit their own inspection.

I’ll get to the afternoon tea that was the focus of our visit in due course, but the house itself entirely rewarded the years of build up that had accumulated thanks to my extended failure to visit. A normal, year-round visit would offer many sculptures and paintings in addition to the typically lavishly appointed stately home sights, but Christmas has seen them really get stuck into showing off so you can really enjoy visiting Brideshead. As we made our way round, we lost count of the number of Christmas trees that had made a friendly invasion, some constructed of artfully lit stacks of books, one comfortably topping 30 feet in height and another prompting confusion about how its stature had allowed access to the room, but all succeeding in complementing the space it inhabited. The circuit of the house gave a succession of delightful moments that served to provoke enthusiasm for dining amongst such well judged splendour.

With the house ticked off, we made our way to the Grecian Hall for afternoon tea. With a roaring fire keeping us company and all the tea we could reasonably drink on hand, this was a delightful environment in which to dine that reflected the wider grandeur without descending into cheap reminders that you were somewhere special. Staff were friendly and attentive without tipping into overbearing attention and the tiered cake stand with our food arrived in due course. We hadn’t taken up the offer of optional fizz, but £6.50 for a glass of Nyetimber sparkly is eminently reasonable.

I followed the menu through from the top, starting off with the “Castle Howard Christmas sausage roll” that offered a hint of liver in the meat and thankfully didn’t leave a hint of grease on the plate. The sandwiches were millimetrically uniform in size and gave up afternoon tea staples of salmon and cream cheese and egg mayonnaise along with Fountains Gold cheddar and caramelised onion chutney and a nod to seasonality with a turkey and cranberry sauce filling. While they were all well balanced I particularly enjoyed the free range turkey that was strongly flavoured and didn’t give into the stereotypes of bland, overcooked, once-a-year meat.

Scones were up next and benefited from hints of cranberry and orange to tease local clotted cream and strawberry jam. We weren’t willing to sacrifice our appetites to too many scones, so quickly moved onto sweet options. My overwhelming favourite was the eggnog filled almond choux bun, to such a degree as to deprive Mrs YoaF of the vast majority of her helping. Castle Howard apple mince pies were presented with delicacy to match the construction while chocolate and caramelised orange cake let neither flavour tip the balance too heavily and Christmas cake soaked in locally sourced sloe gin was as indulgent as it sounds. As one would hope of an afternoon tea, we were overfaced by a small but notable amount, so left with a few treats to remind us of the visit in the coming hours.

Reflecting upon it now, it’s rather ludicrous that I’ve never been inside Castle Howard before (Aloysius would be livid), so the afternoon spent taking in the building and food was a real treat. The afternoon tea will set you back £43.95 including access to the house and gardens (otherwise £18.95) and Christmas displays in the house. I’m already debating which relative I can use to justify repeat visiting Brideshead this year and cherishing the thought of bringing baby YoaF in years to come.

Disclaimer: I was invited to sample afternoon tea. Opinions remain as impartial as ever.