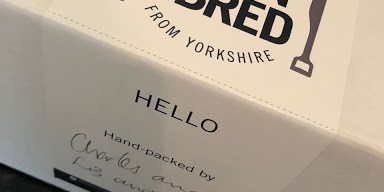 The idea of a recipe box is undeniably appealing. A regular delivery of fresh ingredients, all weighed out ready for you to just throw together in a pan with minimal fuss? What could be better? I’ve not tried a service like this before so after a chat with the nice people of Born & Bred I happily took the opportunity to put their service to the test and see what it’s all about.

Born and Bred deliver recipes designed by the inestimable Yorkshire food champion Steph Moon along with great quality locally sourced produce to show them off to best effect. The care and effort that goes into sourcing the highest quality produce is immediately obvious when you open the box, which contains offerings from reputed suppliers such as Herbs Unlimited, True Foods, Bracken Hill, Dumouchel Patisserie and Listers Farm shop.

For my box, I chose Yorkshire “Savoury Ducks” and “Crispy Yorkshire Haloum!” with mushroom and leek cakes and decided to have a go at the “Ducks” first. This recipe reads really well as a hearty winter dish which pairs lamb mince and liver into good sized meatballs fleshed out with onion, egg, mustard, breadcrumbs and Hendersons Relish. Preparation was easy enough with all the ingredients pre-weighed or measured for you. It was at this point it really dawned on me that this wasn’t going to be a substitute for cooking. While the pre-measured ingredients were a definite neat shortcut, there was still chopping, dicing, grating, zesting and mixing involved though with maximum amount of end user judgement removed by the recipe card. The finished product was everything it promised: a rich and hearty meal for two that was generously portioned enough to deliver some leftovers the following day. The only issue on the plate came from my failure to read the recipe card closely enough and adding too much orange to the sauce, definitely user error.

The fried Halloum! (from Yorkshire Dama Cheese) was a slightly simpler recipe. Fried cheese is a fairly obvious pleasure and the mushroom and leek cakes were reminiscent of Steph Moon recipes that I’ve cooked before. The finished plate was predictably delicious and rather lighter in character than the “ducks”. I ended up making this for a light dinner, finishing the left overs the following day, which were no less enjoyable for the delay.

These boxes are available monthly either on subscription or for a one off payment. Three meals for two people comes to £39, breaking down to £6.50 per portion. I think that’s a very reasonable amount, especially given the obvious care that’s gone into sourcing produce and delivering it in such a way as the consumer can take best advantage of that quality. The only note of caution I’d sound is to make sure you don’t see this as a lazy substitute for cooking. Yes, there are a number of shortcuts handed to you, but this is still cooking and requires some effort. If you enjoy chopping onions as much as me though, that really isn’t a problem. The ingredients I received were enjoyable to cook and turned into lovely meals. I’d happily recommend trying out Born & Bred.

Disclaimer: No charge was made for the delivery I received. Opinions are impartial.