Making Friends with Ham with Ham and Friends (closed) 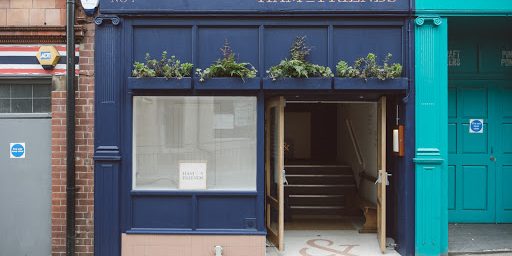 Friends of Ham has been a headline in the Leeds food scene for years, receiving national acclaim from one J. Rayner as far back as 2013 and gaining a second site in 2015, a short distance away in Ilkley. With the passing of another two years, it’s expanded to open a third site back in Leeds, closer to the first venue. The new site was used before Christmas to host a Raclette-based pop-up that, it turns out, may well have acted as something of a dress rehearsal for Ham and Friends.

This site’s offering is rather wider in scope than the original, offering a wine bar alongside a food hall that includes a wonderful walk-in cheese room plus the wide range of charcuterie that you’d expect, alongside a workshop space. It’s impressive how much has been squeezed into the industrially chic small space.

We went along to a preview event to have a poke around and grab a selection of treats to prove the concept and were very impressed with what we found. Starting off with a strong coffee and superbly buttery pastry, we failed to come up with a plan of attack, instead randomly bouncing around the produce until we realised we would have to run for the train back to York.

The cheese room is just as fantastic as it sounds, crammed with all manner of treasures. We went for a Killeen Goats Gouda and a Truffled Pecorino after taking advantage of generous samples. From the meat counter we went with some Lomo and Coppa before grabbing a handful of Northern Star and Wild Beer Co. cans (yet to be sampled but reputedly tremendous) and getting tempted by some salami snacks and charcoal crackers. Clearly we needed to grab a bottle of wine while we were there too (I can’t disclose the bottle, it’s to be a present) before we found that all that only ran us to £40.

The meats and cheeses were wonderful, as you’d expect from an establishment as reputed. It must be said that the Truffle Pecorino was divisive with guests we had for the weekend but, as an affirmed truffle lover, I loved it! The Lomo and Coppa were hugely enjoyable, my preference being for the richer meatiness of the Coppa to the soft fat-rich Lomo.

The provenance of the produce here and attention to understanding supply chains and working with producers shines through. Ham and Friends is both a worthy expansion of the brand and a great addition to the Leeds food scene.

Disclaimer: I received a budget toward the produce we took away. Spending more than that budget indicates my enthusiasm!