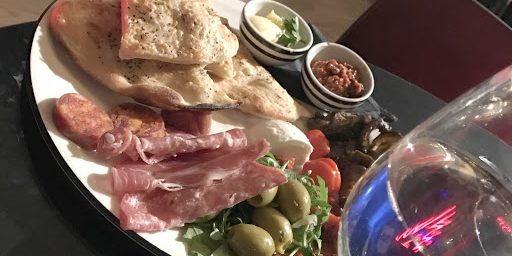 In these days of Tripadvisor warriors, it’s even more true than ever that a restaurant can live or die by the consistency of its food. I’ve been visiting Pizza Express branches periodically for somewhere around 20 years in various cities such as Milton Keynes, Cambridge and York. Throughout all those visits, consistency really has been the theme. I don’t recall ever ordering a mozzarella-topped garlic bread or plate of dough balls and being shocked at a variation from my expectations.

Of the three branches of Pizza Express in York, Museum Street is by far the grandest building, thanks to being housed in what was a Victorian gentlemen’s club, which had undertaken a recent refurbishment. I happily accepted an invitation to check out the refurb and refresh happy memories of the restaurant chain in which I first sampled espresso way back in 1997.

The building has benefitted from updating that’s in keeping with its history, making it a pleasant place to dine. On previous visits here, I’ve noted a lack of soft surfaces in the dining areas that has created an irritatingly echoey space. This has thankfully been corrected to make a much more relaxed experience. Being a former gentlemen’s club (no, not that kind) it should perhaps be unsurprising to find the gent’s loos large and ornate, but they’d been allowed to fall from their previous majesty somewhat prior to the refurbishment; a state that’s now been reversed. Also part of the refurbishment is a seating area that serves as a comfortable place to sit if there’s a wait for a table.

To get the food going, we chose a customary portion of dough balls, a classic Italian antipasto and a few extra olives to pick at to start before taking the venue’s name at face value and requesting a brace of pizzas in the form of an Etna and a Padana.

The service was as brisk as you’d expect from a chain as well established as this, so starters were in front of us very quickly, ready to be grazed upon between the two of us. It might sound like I’m damning with faint praise by repeating the mantra of consistency, but the dough balls were exactly as expected. Light and cooked to the point of a slight char that nicely offsets garlic butter. The antipasto consisted of flatbreads, salami, mozzarella, sweet peppers, sundried tomatoes, a few extra olives and some slices of marinated aubergine. To accompany the bread, a harissa-spiced tomato dip livened things up and gave us a favourite element over which to compete for the lion’s share.

It must be said that the pizzas were delivered on plates that were slightly too small, making it tricky to use the pizza cutters, but the dough was light and crisp under evenly distributed toppings. My Padana combined caramelised onion and goats cheese to good effect while Grace’s Etna reflected its namesake to turn up the heat with a generous quantity of chilli peppers and ‘nduja sausage.

With no space left for dessert, we called it a night and reflected on Pizza Express’s place in our food culture. I don’t think it’s unfair to call it a safe option, but that shouldn’t be seen as a weakness. Perhaps it’s not likely to find itself at the forefront of any food trends, but it’s hard to fault the value and consistency, and the refurbishment of this site brings a lovely building back up to the standard it deserves.

Disclaimer: While our meal was complimentary in return for this review, all opinions remain impartial.