Dinner at the Chef’s Table Malton 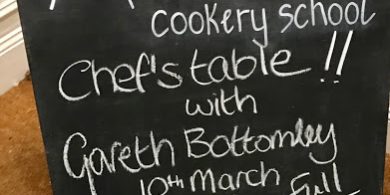 The increasing number of trips we’ve been making to Malton in recent years really highlight the strength of this attractive market town’s food scene. It’s home to a proliferation of independent food businesses and hosts an extremely well-regarded food festival annually, while offering a few lovely places to eat. Situated just off the square in the centre of town, you can find the Malton Cookery School, home to a wide range of courses designed to enhance the culinary presence you’re able to exert in your own kitchen as well as the Chef’s table Malton.

Alongside the courses and foodie tours of Malton, the school offers regular Chef’s Table Malton evenings from a range of respected local chefs, so we gladly sacrificed a Friday night to pop up the A64 and see what it was all about. The chef slated for the evening we attended was Gareth Bottomley from the Charles Bathurst Inn over in Arkengarthdale, who carried with him a wealth of experience and enthusiasm that belied what would certainly be an unwelcome drive home at the end of the evening.

As the ten guests arrived, we found our convivial hosts – Gareth and the irrerepressible Gilly Robinson representing the school – pouring sparkling wine for us and instructing on making chicken ravioli parcels from the fresh pasta that was being deftly fed through a pasta machine. It must be said that there was some variance in the level of competence on display here. I suspect a few (well, mine at least) egos were saved by tactful replacement of a few of the worst examples!

While all this was going on, Gilly was dovetailing her hosting duties with making butter to accompany our meal, something she achieved without the attendant stress I would imagine this triggering should I attempt to replicate the feat at home. With all the prep done, we took a wine list and made our way to our seats ready to watch Gareth get to work.

The starter was the first of two fish dishes: a smoked haddock brandade with tartare sauce and pea shoots followed by a luxurious pair of pillowy scallops with a ham hock croquette and leeks that had been both creamed and burnt. Having ten voices competing for attention as you try and cook in an unfamiliar kitchen while keeping everything moving at an appropriate pace without warming lamps is far from ideal, but Gareth retained his good humour and obvious cooking prowess admirably. Both of these dishes did justice to their ingredients; the leeks in particular providing a lovely accent on the scallops. The left over creamed leeks were quickly snapped up by appreciative diners, but it’s fair to level a minor criticism at the parmesan crisp that would have benefited from a touch more crisping.

Moving onto the meat dish, the chicken-filled ravioli that we’d laboured over earlier was reintroduced (looking suspiciously more well presented and uniformly put together than when last seen) alongside chicken breast meat, two textures of sweet potato, kale and peas. A crispy wing also graced the plate to extend the dish’s remit from the advertised duo to a trio. The pace of questions being posed to Gareth slowed a little, reflecting the enjoyment the diners were taking from the plates, while Gareth set about plating up dessert with able assistance from Gilly and a blowtorch employed to loosen the chef’s rings.

The final plate of a peanut butter parfait with roasted peanut brittle and soft chocolate arrived simply presented with a shard of neatly tempered chocolate and a smear of melted chocolate cutting a swathe through the white plate. It’s a shame that the chocolate smear had set before getting cutlery upon the dish, but with a little effort to lift it, there was no real compromise to the combination of light, chilled parfait and rich spikes of chocolate flavour.

We had a thoroughly enjoyable experience at the Chef’s Table Malton. It’s a real pleasure to watch good chefs at close quarters and, when they’re happy to field questions all the way through the experience, it only adds to it. The food was lovely and small number of seats made an intimate evening which, while clearly a special occasion, didn’t resort to uncomfortable formality. Looking at the list of chefs, it’s obvious that there’s going to be a great range of experiences at subsequent events as the various personalities work and talk just a few feet away. I’d certainly recommend it.

Disclaimer: A portion of our meal was covered in return for coverage here. As always, opinions remain impartial.