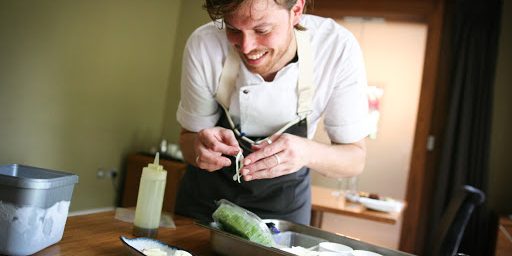 Skosh (noun) – from the Japanese word Sukoshi, meaning a small amount or a little

Be one of the first to step into the contemporary dining room in their recently renovated, Grade II listed building at 98 Micklegate, York.

Two years in the making, Skosh will offer a grazing style menu of contemporary and internationally influenced dishes served from an open kitchen, providing York with a dining experience that is casual, personable, intriguing and exciting.

Skosh will open its doors for the first time this spring, offering a grazing style of dining with a contemporary British menu with an international influence.

Neil Bentinck embarked on a journey to open his first restaurant a little over two years ago with one fundamental idea – to create a space that he himself would enjoy dining in. Great tasting, interesting and creative food served in a modest and modern environment with an unfussy drinks list and friendly, informed service.

This independent restaurant is not about reinventing the wheel, but rather bringing together all the best aspects of the emerging casual fine dining culture.

The urban, modern dining room with an open kitchen is a reflection of Neil’s cooking which is contemporary, fun and honest; food best enjoyed in a comfortable and engaging environment. Snacks, small plates and sharing platters offer informality and variety. Signature dishes, such as SFC (Skosh Fried Chicken), baked hake with dukkah, and goats curd marshmallow, show a refined but playful style of contemporary cooking.

The sourcing of ingredients and service ware has been meticulous and consciously so. To create a great restaurant, Neil is aware it takes more than one chef, but rather a network of incredible suppliers, producers and craftspeople.

Neil Bentinck – The Chef and Owner

Just under three years ago, Neil made the decision to leave his head chef position at the award-winning fine dining restaurant Van Zeller in Harrogate, with the view to pursuing his dream of opening his own place. While trying to come to terms with the startling complexities of setting up his first restaurant, Neil undertook some fantastic opportunities to work in some of the best kitchens in the country. In London, Neil worked with Sophie Mitchell in Knightsbridge as well as starring as guest chef in a string of sell-out popups at East London-based urban holding Stepney City Farm. Back up North, Neil took on several rewarding contracts with Michelin-starred restaurants, including Northcote and The Star Inn. And, if his plate wasn’t full enough, in November 2014, Neil and partner Chelsey welcomed the birth of their first son, Henry.

Neil’s boyish enthusiasm for food, as well as his eclectic cooking style, can be largely credited to his late father’s Indian heritage. Born and raised in India, Neil’s dad Mike moved to England in the early 70s. An avid gastronome, Mike was always cooking traditional Indian dishes alongside Jackie, Neil’s mum, and her more classic British recipes. The memories of these familiar smells, spices and flavours of home have heavily impacted on Neil’s career and style of cooking.

Neil’s CV reflects his ambitious and inquisitive nature. He has honed his skills in some of Yorkshires’ finest culinary institutions – The Sun Inn (Colton), Blue Bicycle (Fossgate), Churchill Hotel (Bootham) and the Michelin-starred Pipe and Glass (South Dalton) – while interspersing these lessons with trips and work abroad in Australia, Thailand, America, New Zealand and Japan.

Skosh is the natural culmination of family influences, worldwide travels and professional growth.