What Price For a Memory? 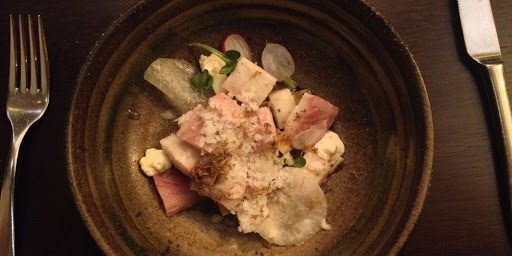 How much would you pay for a meal? Last week at work, I was asked for a recommendation to go for a special meal in York and suggested the Star Inn the City, warning that the cost could easily top a hundred quid for two without significant restraint. My colleague had a fantastic evening and set a new personal benchmark of £150 while the rest of the office howled protestation. It took a full 48 hours for me to admit I’d paid £350 for a meal for two and face up to the chorused response: “just take me to nandos” and “I’d be livid if a bloke spent that much on me” were a couple of the more measured comments, but I’m unrepentant. How much would you pay for a meal?

You’re stuck with food. If you don’t eat, you’re not around for long so I can’t countenance any argument that suggests drawing the fun out of your meals. Yes, it’s a bit of a leap to go from there to borderline illegal credit card abuse, but there’s no excuse for not enjoying it irrespective of if Nandos or Noma is your thing. Giving up on your food is giving up on life.

It was that conversation at work that prompted me to write this piece. I’d not really intended to delve too deep into the past when picking places to write about, but realistically the chances of my spending £300+ on a meal in the same place twice are low so it makes sense to milk the occasion, even if it was a couple of years ago. From what I’ve read in the meantime, my experience is still pretty relevant. So, how much would you spend on a meal?

A couple of years ago, my partner and I had decided to assault my recent redundancy cheque and head to Cambridge for two meals on consecutive days in Alimentum and Midsummer House to tick off three Michelin stars in two days. We had a budget in place and empty stomachs, so off we went to bask in one of the country’s most beautiful cities.

Cambridge is a fantastic city that bears repeated visits: you can enjoy the multicultural delights of Mill Road, the spectacular colleges, go punting on the Cam, enjoy the museums or just get stuck into some really great places to eat. Noodles courtesy of Dojo’s or Yippee Noodles are an easy way to go while Browns offers an easy choice for a moderately more exclusive meal. But Alimentum and Midsummer House are the headline acts. We had tables booked for Alimentum on the first night and Midsummer House on the second to compare and contrast.

A perfect place to have a pre dinner drink on the way to Alimentum from the town centre is one of my favourite pubs, the Flying Pig. It’s friendly, serves good beer, has nice staff and a sense of character. All of which mark the place out as something special alongside my enduring sense of nostalgia that recalls student pool playing. Suitably fortified, we took a stroll further along Hills Road to dinner.

Mark Poynton served for seven years at Midsummer House and there turned out to be a few obvious influences when we’d sampled both menus. In Alimentum, we started with an amuse bouche of pleasingly tart balsamic vinegar popcorn and deliciously light cheese choux buns while offered neatly miniaturised loaves of bread, lighter than their breed would suggest. A soup course that, unless memory fails me more than usual, contrasted cottage cheese with pea and preceded a stunning carrot salad with mustard ice cream. The smoked eel with horseradish was followed by a chunk of beautifully presented fish, all accompanied by a perfectly matched flight of wine. A memory that sticks with me is of the stunning venison. Moist beyond compare and peerlessly matched to delicate apple slice. Certainly these are the moments that stick in the mind and justify (broadly) these occasions. Finishing with cubes of flavoured marshmallow and fruit, everything was well poised for a couple of games of pool back in the ‘Pig.

So far, we were only a couple of hundred quid down, but the prospect of a more significant financial kicking loomed the following day as we approached Midsummer House. Staffed by obviously knowledgeable foodies recruited by Daniel Clifford, this two Michelin star establishment has built its proprietor’s reputation over the last decade or so and offers a lovely, though rather formal, place to eat.

A blue cheese, broccoli and fresh pear salad deconstructed those elements into chunks, smears and slices to get things moving along before one of the weekend’s highlights. Scooped out at the table, a whole celeriac that’d been slow-cooked in bbq coals sat amongst elder and celery ham hock. Delicate and scorched just enough to bring out the flavour of this underrated vegetable, I shall forever hold this dish close to my heart. Next up was roast skate with squid and artichokes then slow roast venison with suet pudding, both reminiscent of the previous evening, and equally well-presented.

While all this was being served up, the wine flight kept coming and, though well chosen, lacked the friendly explanations offered in Alimentum. We also were introduced to the crumb scrapers. It doesn’t come naturally to me to have servile underlings serving me, so I found it a bit odd to allow every drink to be poured for me, having crumbs scraped away from me even more so. These actions highlighted the difference between the food tourists (us) and those who took this kind of thing in their stride (the adjacent table).

Moving the focus back to the food, we gratefully accepted a cheese course before heading on to an apple crumble with vanilla baked yoghurt before finishing up with a rather sharp raspberry roulade. Topped off with an espresso, we thanked our hosts before heading off to meet friends who would be good enough to ferry us back to the hotel.

Let’s be clear. This is a huge amount of money for two meals. This was a fantastic experience for the moderately well off foodie and one that I would repeat. As I mentioned in my preamble, I’d probably not spend the same amount again in the same place, but I’d make no attempt to put you off it.The fact that I’m telling you this from a memory two years old speaks volumes, so if you’re contemplating cracking your wallet open, give the upper class thing a go. How much would you pay for a meal?