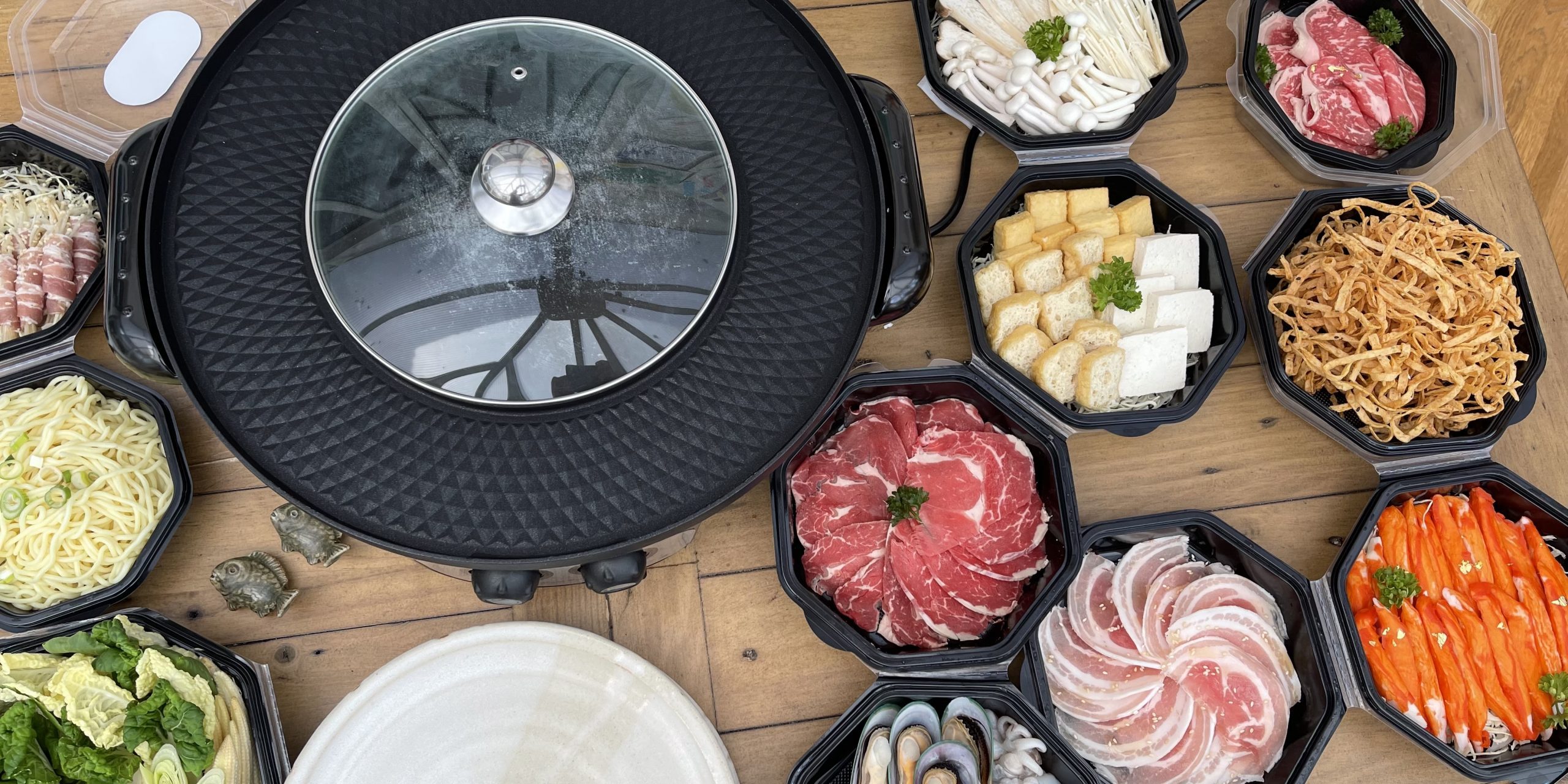 It should go without saying that I’ve tried pretty much every kind of takeaway in York. I have regular go-to’s for most of my regular cravings and have taken a punt on an awful lot that haven’t quite measured up. At this point I suspect most regular delivery drivers in York have my address well memorised. I’ve also sampled plenty of meal kits and at home offerings over the last year or so for obvious reasons but never a locally delivered experience that involves cooking for oneself using special equipment. Octagon Hotpot is a new business local to York which offers an at-home hotpot cooking experience that delivers all the equipment and ingredients you need to replicate an authentic hotpot experience at home. When they got in touch I was extremely eager to give it a go!

Cooking in a hotpot like this involves a central, shared pot of simmering broth in which fresh ingredients are cooked as desired by those around the table. The central, deep reservoir of this electrically heated appliance is split in two, allowing you to select a couple of different broths in which to cook your fresh produce. We were sent a large selection of meat, seafood and vegetables to sample along with a selection of dipping sauces too so after a good bit of table shuffling to fit it all in we had a whole lot of stuff to get stuck into!

Getting started was simple, pouring the broth into either side of the reservoir and hitting the power to get it up to temperature and getting the grill around the edge of the unit good and hot. I’d been a touch concerned that the nuances of establishing whether or not something was cooked would undermine the enjoyment of the experience but the accompanying instructions went through how long each ingredient would take to cook and the meat was sliced so finely that even the briefest exposure to heat would likely render it safe to eat. The ingredients covered meat, seafood, tofu and vegetables and were joined by a range of dipping sauces. From this we dipped our figurative toe in by dipping some slices of meat, trying the beef first with hugely satisfying results. The Octagon Hotpot broths we’d been sent were “Shabu Shabu” and “Golden Veg” which both started off with just the right amount of punch and were gradually enhanced by each successive thing that was cooked in it. The Shabu Shabu with kelp and bonito was particularly well balanced, while the vegetable based equivalent was subtler but well placed to let the ingredients speak for themselves.

We started by popping a few veg into the broth that would be less sensitive to overcooking while we found our feet then experimented cooking the paper thin slices of meat both in the broth and on the grill. Slices of beef and pork belly were delicious when grilled but further enhanced by cooking in the broth, cooking through pretty much instantly and handholding the broth to even greater depths of flavour. Bacon-wrapped enoki mushrooms rewarded a slightly longer cooking time with bags of flavour while mushrooms with their unwrapped counterparts offering a subtler pleasure. Three different preparations of tofu jostled for greatest desirability, all delivering but none emerging as a clear winner from the group before we worked on a generous selection of seafood. Scallops cooked both in the broth and on the grill were all one would hope, mussels were well suited to lifting the mood and crab sticks were plentiful in number and flavour.

All the time we were cooking things in the broth it was further developing in flavour while also acting as a conversation point and focus for a meal that really felt like an event. With some startlingly flavourful dipping sauces in the mix too, this meal was an unqualified success. The selection that the guys at Octagon Hotpot were kind enough to send me added up to a nudge under £140 which fed three of us an indulgent amount before serving up enough leftovers for a second meal for three, making this unarguably good value, and as an opening offer, if you order £100 worth you even get to keep the hotpot! The simple nature of running YOAF and trying to get through as many different meals as possible makes repetition tricky, even when I really want to, but I’m already planning who to invite round for a repeat of this quite exceptional experience!