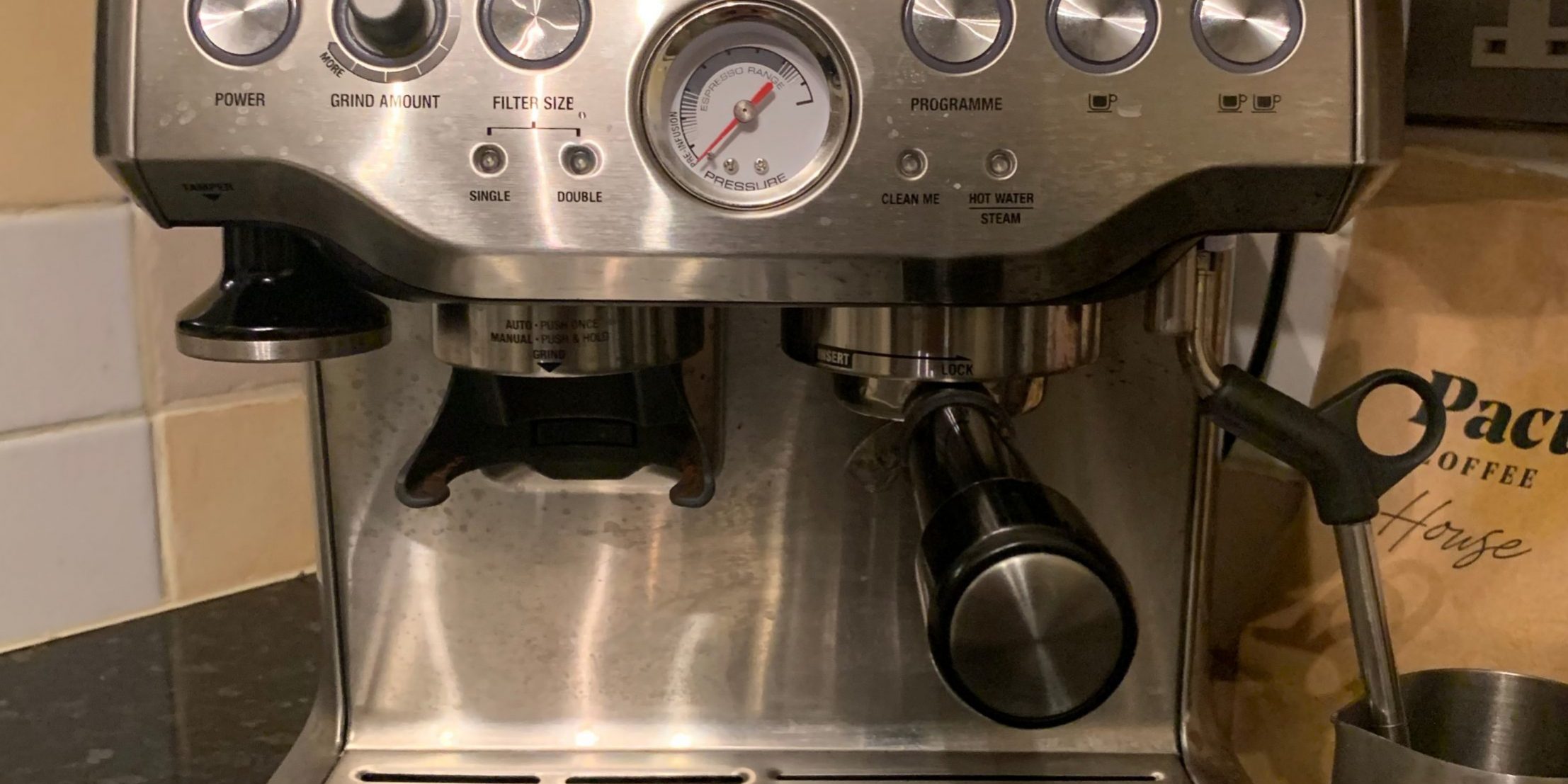 A few months ago I had to endure a big birthday and, therefore, find a few ways to soften the blow. The alternatives to ageing don’t really bear consideration, but when there’s a zero in the number it’s a good excuse for an indulgence. My drip filter coffee machine was looking decidedly battered so I drew those two threads together and set out on the hunt for an appropriately prestigious coffee machine to replace it, with the Sage Barista Express heading my list.

I immediately ruled out pod systems on the basis of being restricted to whatever coffee is available in the right shape to push into it, not to mention the obvious environmental concerns, so decided instead to opt for a traditional espresso type machine. Nearly twenty years ago, I owned a Gaggia Espresso Deluxe that did sterling duty until it suffered catastrophic failure through lack of maintenance on my behalf, something I regret to this day. That machine featured a difficult to clean network of pipes that were intended to ease the passage of milk frothing. Since then I’ve gained a bit more experience with a steam wand, so that added to the criteria, meaning just a plain metal steam wand without any of the silly plastic sleeves that seem to proliferate on many models.

With those ideas in mind, I had my eye caught by Sage Barista Express, the in-built burr grinder adding another attraction to this bean-to-cup style machine. £450 felt like a decent chunk of cash to drop on a domestic coffee machine, but still a much smaller amount than the catering examples that this reputed to match for quality. For the record, I picked it up from John Lewis who currently have it for £400 at the time of writing.

The machine itself is extremely handsome in stainless steel and sits relatively unobtrusively in the corner of our moderately sized kitchen. Thankfully its height and my measuring skills tallied to ensure it had a few millimetres of headroom under the wall mounted cupboard I’d intended it to be placed. Getting set up was a doddle, consisting of little more than topping up the bean hopper, filling the water tank and jabbing a few buttons to get a hot espresso shot. This is where the snag comes though. The descriptor bean-to-cup implies that you can mindlessly dump beans in one end, prod a button and be rewarded with a perfect cup of your chosen coffee, but that isn’t really true. Having read up on this machine, I was aware that this would be the case and ready to undertake some significant fiddling to get the results I wanted. I started by doing nothing more than throwing a bag of supermarket beans into it and sticking to the factory settings then using the built in pressure gauge to judge if the timing, weighing and extraction was balancing ok. Suffice to say, the results were mixed, being acceptable but not what one would expect from a new investment approaching half a thousand pounds.

Luckily for me, I’ve a friend who’s a well regarded coffee industry consultant, former cafe owner and reputed entrant in the UK Barista Championships who was happy to pop by and fiddle my new toy into proper configuration one morning and explain the balancing of water quantity, length of extraction and weight of grounds. Her detailed tuition while we weighted out coffee and water and knocked the grind back and forth to allow the appropriate extraction was an enlightening experience. I can’t thank her enough for giving me this great shortcut to setting my machine up to work with the Pact coffee subscription I took out to partner it.

Your success or otherwise with the steam wand will depend on your skill and commitment to practising. I became competent enough a few years ago while working in a restaurant so have reasonable judgement with it, certainly enough to please any of the audience in this house. Note though that the steaming jug has a temperature indicator mounted on its side to help in your efforts.

Having been using this machine a few weeks, I’m extremely impressed. The standard of coffee I can produce at home is the match of most I’ve been commercially served, though the committed ones retain their edge unsurprisingly. It heats up quickly, is easy to clean and packed with clever touches such as a dated water filter to prompt replacement, a reminder to empty the drip tray that elegantly floats into view when needed and a magnetically concealed tamper.

There’s really very little to mark it down on. It’d be nice to have a larger reservoir and it takes a couple of moments to build pressure for steam but those really are the most minor of complaints for a domestic machine that impressed my tame expert a great deal. That said, the scope for disappointment does exist if you’re not enthusiastic enough to properly configure the machine, though I’d suggest that spending hundreds of pounds on a coffee machine would be a strange thing to do if you lacked that drive. I was lucky enough to be able to call on a friend’s expertise, but I know other people who’ve successfully used Youtube tutorials to achieve success. If you’re in the market for a smart addition to your armoury of kitchen appliances that’ll transform your coffee offering, I would recommend the Sage Barista Express without hesitation.