Back to the Plum & Partridge (closed) 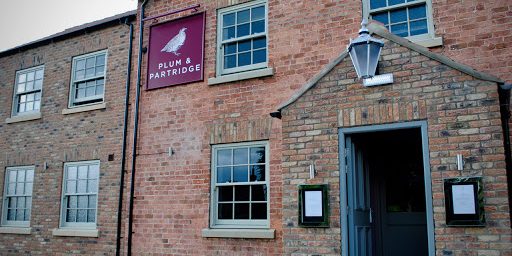 Back in June I headed up to Husthwaite to enjoy an overnight stay at the Plum & Partridge. I had never visited the village before, but found it to be a relaxing and calm refuge not too far from the White Horse at Kilburn and the nearby beautiful countryside. The rooms were lovely, service attentive and food good, so I had every intention of making a return trip but, being busy trying to keep on top of this site amongst other things, I hadn’t found time to do so. When I heard that the P&P was under new management with a highly regarded chef in the kitchen, I didn’t waste time accepting when an invite was forthcoming.

The kitchen is now run by Harrison Barraclough, who’s joined from the (2 AA Rosette) George at Wath where he forged a strong reputation for his great dishes. He’s also put in an appearance on Masterchef:The Professionals, but it was the opinions shared by trusted friends in the food world that really heightened my anticipation for the meal.

Nothing really needed changing at the P&P so, thankfully, it hasn’t. The bar area remains open and comfortable, offering a space to relax with a pint that doesn’t intrude on the dining area along with comfortable seating at which to enjoy a meal. On arrival, we were met by Ellie, taking charge of front-of-house, who invited Harrison out for a chat. Being the only pub in the village, the Plum has a potentially tricky balance of roles to fulfil given the obvious ambitions to be a restaurant worthy of detour, but Harrison’s desire to be a part of the community was obvious. Harrison and Ellie have made a clear effort to contribute to Husthwaite, dropping off snacks to the village’s “pop up pub” and making sure that there’re a range of pub staples on the menu. After a good chat we pretended we hadn’t reviewed the menu in advance and placed our orders with no hesitation.

I’d had an eye on the venison carpaccio on the way to the restaurant, so Harrison’s admission he was pleased with the dish made it an obvious choice along with a beetroot dish that added mozzarella and goats cheese to the party. Before long, Harrison was back to deliver both to our table along with descriptions. Both of these first courses exceeded (extremely high) expectations. The beetroot textures let the ingredient shine through with mozzarella and goats cheese “snow” variously softening and sharpening each mouthful to give a variety of backdrops against which the beetroot could shine. It turned out that Harrison was entirely right to be proud of the venison carpaccio. Parsnip crisps and pomegranate seeds garnished the meat along with accents of mushroom, radish and nasturtium that all served the main ingredient well. What really pulled the dish together was the bowl of perfectly presented crisps that were utterly uniform and garnished with foraged herbs to wonderfully earthy effect, lending the meat a huge wallop of texture and flavour that remained complimentary and never overshadowed any other element. I’ll be surprised to take such satisfaction from crisps at any point in the near future.

For main courses, we’d gone for pan fried sea bass with carrot, gnocchi and samphire and a brown shrimp and lobster sauce along with coffee braised beef cheek that was supported by sirloin, leek, onion shallot and fondant potato. After we’d polished off those first plates, we had extremely high expectations which were thoroughly beaten. The sharp onion flavours cut across the front of the rich beef wonderfully, with the sirloin and braised cheek earning equal billing as stars on the plate. The generous sea bass portions made great friends with the samphire and carrot while being underpinned brilliantly by the gnocchi. Tying together the fish dish was that wonderful sauce full of brown shrimp and rich lobster flavour which struck a superb balance between delicacy and richness. Along with the samphire, it rounded out the dish with understated flair to create a rounded plate of food.

To polish off, we went for a lemon and honey panna cotta paired with burnt white chocolate and a limoncello syllabub. The presentation was striking, the ancillary elements describing a stripe across the side of the plate while the panna cotta was sunk into an indentation. There was no doubting the quality of the dessert, but it didn’t hit the notable heights of the previous dishes.

This was one of the most enjoyable meals I’ve had for some time. Every dish had memorable strong points with the vast majority holding their own amongst in company. Complementing this was great service with Harrison insistent that while in the midst of service he’d try to get to every table to be face to face with his audience, something that was easily achievable on a quiet Monday, but will become trickier when he’s as busy as he deserves. With a food bill just breaking the fifty pound mark, there’s absolutely no argument against value here; the Plum & Partridge is hitting its brief brilliantly. I’ll happily take a detour to come back and I’d be very happy to have it as a local to pop by for a quick bite any time.

Disclaimer: I was invited for this complimentary meal with no conditions requested. Opinions are, as always, impartial.