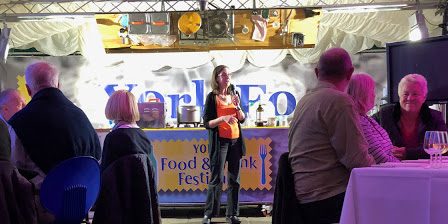 The 2017 York Food and Drink Festival is behind us now, and was a fantastic event that featured lots of great street food, traders, demos and bars taking over the centre of our city. Prominent this year were a series of events in the demonstration tent in the evenings, which featured the Star Inn the City, Rafi’s Spicebox and Melton’s. The Melton’s at York Food Festival event was a fish and wine pairing on the second Friday of the Festival, which I was more than happy to accept an invitation to attend.

I was attending by myself, so was very glad to be made welcome by two friendly couples on the communal table with whom I checked over the menu and wine selection, kicking off with a San Marzano Verdeca and some salmon canapés. The Verdeca was unfamiliar to most of us around the table and, thanks to a generous serving policy, remained a favourite when paired with all the courses.

The Melton’s at York Food Festival evening was introduced by Lucy Hjort from Melton’s who presented the next of her wine pairings as a Labguedoc Viognier to go along with a dish of blowtorched mackerel presented with beetroot and horseradish. Fresh mackerel is always a joy and paired nicely with chunks of beetroot, beetroot jelly and well judged horseradish. The Viognier did a superb job of softening the strong mackerel flavours.

After our main was introduced by one of the chefs from Meltons, Lucy set her merry band of helpers to pouring out a Turkish Kayra Blanc de Noir” rosé to go with a bouillabaisse featuring red mullet, salmon, coley and mussels. The dish was served with a ‘rouille’ (a saffron, pepper, garlic and olive oil dressing) to pair with some charred bread. The table felt that rosé perhaps wasn’t strong enough to fight through the rich bisque, but it’s possible we were guilty of polishing off the samples before giving it a chance with each individual element.

The final pairing of the evening was a dessert of pear and tonka bean baked cheesecake with an Australian Berton Reserve Botrytis Semillon Riverina 2015. This was the highlight of the evening for me despite my general tendency toward savoury courses. The subtle tonka beans weren’t overwhelmed by the sweet wine and the pear element was well judged. I’d have happily eaten twice as much.

The evening pop ups in the demo tent were a great asset to this year’s Festival and well received by those that I spoke to. As with the Festival in general, it could have done with better toilet facilities, but working in a temporary venue had no obvious impact on the standard of the food and there’s no faulting the suitability of the wine pairing. I’ll definitely be keeping an eye on the schedule next year and hoping for more of the same.

Disclaimer: No charge was made for my attendance, opinions are as impartial as ever.