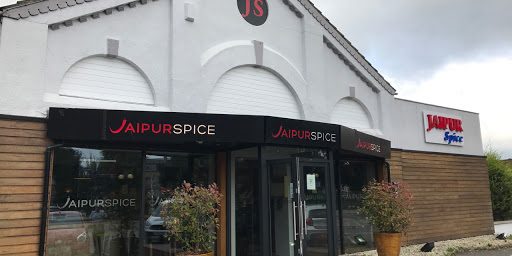 Getting your hands on a good curry can be a bit hit and miss when eating out. There’re plenty of places that can provide you with a plate of generically spiced, slow cooked meat with dense naan and buttery rice, but genuinely special plates of Indian food don’t tend to be that common up here in the provinces. Once you find somewhere safe, the temptation to never stray is strong, potentially to the detriment of other places worth checking out. With that mindset, I took up an invitation to try out Jaipur Spice York on Haxby Road with the assurance that it wouldn’t disappoint.

Jaipur Spice doesn’t reside in a part of York that’s terribly convenient for me, so it’s about seven years since I last visited, now a dim and distant memory, and since then the prominent bridge-on-the-water feature and booths around the perimeter of the room have been removed to make a more open plan dining space. An unobtrusive bar sits at the front of the room to service takeaway business without disturbing those dining indoors.

To start, we chose a calamari dish and some garlic mushrooms while occupied with a few poppadoms and nicely balanced pickles, obviously accompanied by a cold pint of Cobra. As we finished bullying the poppadoms off the table, our starters turned up quickly, with the garlic mushrooms taking preference over the calamari that, while perfectly well judged and presented, wasn’t the crab dish that I’d intended ordering but wasn’t available that evening.

Coming to mains, I’d taken the server’s advice and plumped for the Jaipur Spice Special while Grace took a place at the sweeter end of the spectrum with a mango based Amli Chicken. Mindful of our appetites, we restricted ourselves to a single rice dish and naan to share along with a Brinjal Bhaji side, made of pan fried aubergine with onion and spices. The aubergine hadn’t picked up as much grease as one might fear and the naan and rice hit the spot perfectly, absorbing sauce and flavour sauce as required.

The Jaipur special bulked out with a combination of meats, chicken and beef being prominent, in a tomato based sauce. The dish was well spiced and rich, making a place for itself at the top end of a well executed mainstream “British” curry, though I did wonder if there was anything more representative of the restaurant’s character on offer that I could have gone for. Grace’s Amli dunked chunks of chicken into a buttery mango sauce, the chicken exhibiting welcome signs of a trip to the tandoor while the sauce was rich and light.

By this point, we’d hit the traditional curry wall, so I bagged some brownie points by bagging the rest of the curry for tomorrow’s lunch. It’s a perk of a meal like this to be able to admit defeat and take your leftovers home (do you really think the chef who cooked them would rather bin them than know you’ll enjoy them tomorrow?) to further enjoy them the following day. Jaipur Spice gives out good, honest curry dishes and will be on my list whenever I fancy that in the future.