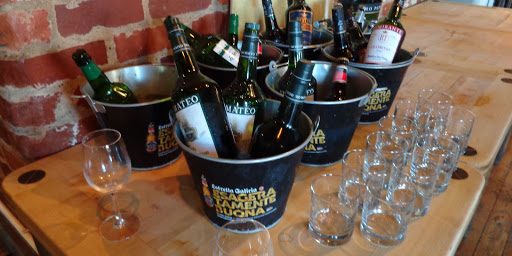 All of us have a food that takes us straight back to some childhood horror (don’t we?). For me it’s sherry. Yes I’ve the usual distant recollections of Christmas morning sherry drinking amongst elderly relatives but the real issue for me came when gagging on a long forgotten mouthful of food. I instinctively grabbed the nearest liquid but only exacerbated the problem as it was a glass of sherry, to the regret of the living room carpet. Cut forward about 25 years and I’ve just walked out of 12 Years a Slave in a justifiably emotional state to see a tweet from the ever lovely Ambiente offering a free glass of sherry with Ambiente in return for conspicuously saying ‘Jerez!’. Needing refuge a course was set and my partner whispered (nay, shouted) the magic word to produce a free glass. I may only have had a inquisitive sip, but it wasn’t what I expected. It didn’t taste of petrol or urine.

This week I was lucky enough to be invited to taste sherry with Ambiente in Leeds. As previously recorded here I’m a fan of their York restaurant so aside from anything else it was a lovely chance to pop across to Leeds and check it out. Set in a lovely building a few minutes’ walk from the station the restaurant is centred around an open kitchen – a trait which I immediately felt jealous isn’t shared in York.

The sherries were provided by Real Tesoro with fascinating and knowledgeable introductions from their representative Jaime Delage Estevez, a family member from Grupo Estevez. Starting with a beautiful light Fino paired with olives wrapped in anchovy and marinated pepper we caught up with some friends including the lovely CosyCoffeeShops to talk things through. In short order the group agreed that anchovies, peppers, olives and sherry were all good things.

After the light beginning, things stepped up a notch with the Manzanilla. Marginally stronger and darker but still a beautifully translucent drink things progressed well, accompany beetroot discs with goats cheese and fennel. Scraps of Iberico ham were passed around as we debated the place of sherry in British society…..as were salmon chunks, tomato with basil pesto, king prawn and chorizo skewers….in retrospect I feel even luckier than 24 hours ago.

A glass of Amontillado eased our transition to the darker more notably conditioned drinks and, pleasant though it was, didn’t make the impression that the Oloroso did. As the darker sherries took their place, effectively paired with barbecued lamb chunks, most agreed this one struck the best balance between complexity of flavour and refreshment. By now we were superbly well versed on the Solera system and making many new friends.

To polish the evening of sherry with Ambiente off we moved onto a PX Sherry (PX being one of the three grapes you make sherry with). We were warned this would be a notable step from dry complexity to intense sweetness. Tempering the sweetness we were presented with chunks of salty, sharp Roquefort. Working backwards to my personal preference, as someone who’s not drunk sherry intentionally as an adult before, I’d go for the initial FIno with which we were presented as an aperitif or the Oloroso to accompany tapas. The PX presented interesting aftertaste but I couldn’t help but feel the sweetness was overpowering.

Following a lovely evening, would I take the the advice and pair sherry with an entire meal? No. Saying that, I very much enjoyed what we tasted and the variety of flavours but I wouldn’t swap the flavour range we were presented with for the softness of a nice red against rare red meat. The whole thing certainly merits further investigation.

Thank you again to the always marvellous Ambiente for a lovely (and, for the sake of transparency, free) evening