Further Tours in a Dish 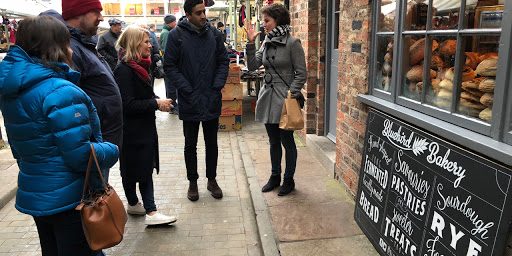 Way back in April of last year, I was invited by Tours in a Dish to sample their Afternoon Tea Tour of York. On that occasion I was busy, so the reliably superb Grace stepped in and had a lovely time. Since hearing how impressed she was, I’ve felt rather like I missed out on an opportunity for food indulgence around York. Luckily for me, Tours in a Dish have expanded to offer more than one tour, so when an invitation came to try their Hidden Gems Tour, I was only too ready to accept!

Camille, who runs Tours on a Dish, moved to York to study and has since fallen in love with our food scene of which her tours are now a part. This Hidden Gem Tour was intended to offer a glimpse of independent businesses around the city centre that one might perhaps not otherwise stumble upon. The standard £42 tour (deluxe tours come in at £60) takes in 6 stops, interspersed by plenty of local history snippets while moving between them. The day I attended was fortuitously free of rain when we met outside the York Roast Co. to embark on our food journey.

The first stop on the tour, after some mercifully brief housekeeping, was Bluebird Bakery over on the Shambles. We’re really lucky in York to have several fantastic bakers, so it’s no surprise I’m a fan of Bluebird and gratefully pocketed the generous samples that included a superb spinach and chickpea roll. The lady who introduced us to the produce did a wonderful job of bringing the business’s journey to life before we hit the streets again to move on to Appleton’s Butchers on Lendal.

Primarily a pork butchers, Appleton’s have only been in York a bit over a year but have, in that time, established themselves as supplying superb quality meats while making efforts to resurrect the classic York ham. The member of staff who greeted us and talked us through the products clearly relished the chance to evangelise about her products, passing out plenty more samples including a fantastic black pudding pork pie.

Next up came a new one to me in the form of Ippuku Tea House where we enjoyed a couple of specialist teas and some delicious chickpea teriyaki skewers. I’ve had Ippuku on the list for a while (thanks in part to Camille) and this visit only served to further whet my appetite for the full experience. The passion with which the teas and food were introduced continued a theme of unadulterated enthusiasm in our hosts, making me proud of the wonderful people who contribute to this city.

The Merchant Adventurers Hall is a stunning part of York’s history and well worth a visit in its own right, making it an apt place to stop after a brief pause to take in the site of York’s forthcoming chocolate factory on Castlegate. Cafe No 8 offer coffee and cake in this historic building along with savoury options. We were given a sample of the “Merchants Pie” that packed plenty of spiced flavour along with a well judged combination of meats to go with couscous and relish. The elderflower and gin cocktail we were given here was another generous touch.

Penultimate on our journey was Korean restaurant Oshibi. Tucked into a quiet fold of Fossgate, this is one that I’ve not managed to get to in a couple of years so I was appreciative of the chance to check in. We were welcomed with a Korean “milky rice wine” that was somewhat divisive in appearance but pleasingly yeasty and reminiscent of a beer to taste. This was a longer stop and involved plenty of food, spiced minced beef (bulgogi) and a mixture of seafood and vegetable pancakes serving to light our way as we made tracks for our final stop.

Los Moros is well established in York as one of the premier street food outfits from which to indulge oneself. The Shambles Food Court, in which it’s based, has come on in leaps and bounds over the last 18 months to match the passion and enthusiasm that Tarik puts into his food. By this point, the group was suitably well indulged but still managed to get stuck into the amazing falafel and hummus we were given.

Throughout the tour there was a huge amount of love and passion on show from both the producers and the guide. I found it a delightful indulgence to spend a few hours to see my city shown off to visitors but, more importantly, my tour mates visiting York were suitably impressed by everything they’d seen. This tour was a fabulous way to showcase the independent businesses that give our food scene so much character. Tours like this only offer more opportunities for more people to sample that scene.

Disclaimer: No charge was made for my attendance, but opinions remain impartial.