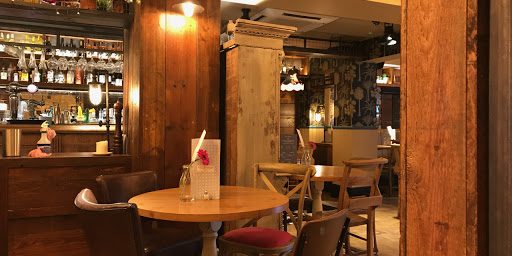 Joe’s Kitchen has popped up in conversation a few times with friends who’ve praised it for being child friendly, good value and good quality. So when the offer came through to go and check it out for myself and check out their summer drinks menu, I thought it only sensible to accept and see for myself.

The building Joe’s inhabits is on the edge of St Helen’s Square on Coney Street and was previously inhabited by Cafe Rouge and, before that, Costa Coffee. Since taking possession it’s been sympathetically restored to a light and open space that’s verging on rustic, but not pretentious or forcedly so. When we arrived for an early dinner on a Thursday, there were enough diners to give the place a buzz, but thankfully not crammed into one corner of the restaurant.

In a characteristic display of indecision, my dining partner and I bought some time with a bowl of Padron peppers to nibble at while taking part in further deliberations to be facilitated by cold drinks. The “Joe’s Lager’ was pleasingly cold and good value while my friend enjoyed an Elderflower Gin Spritzer with the peppers, that weren’t too spicy or charred toward too much bitterness.

I settled on mozzarella bocconcini to start which came accompanied with tomatoes, walnut pesto, balsamic and an unnecessarily large amount of rocket (as seems to be the custom these days). While the tomatoes could have been roasted a little longer, it’s very hard to go wrong with fried cheese so everything worked out well, as with my companion’s starter of panko coated chicken goujons that came with the same chipotle mayo as the earlier peppers. The slaw it was served with was fresh too and the chicken moist. Time to order another round of drinks before the mains arrived with Maple berry fizz being the choice this time. This cocktail was reportedly very refreshing until the last mouthful, in which a concentration of maple had formed.

Prompt but unfussy service delivered my grilled salmon without undue delay. The dish was simply presented with smashed potatoes, vine tomatoes, asparagus and Hollandaise. The simple presentation was entirely appropriate and the ingredients all tasted fresh, though the salmon would have benefited from a shorter association with the grill. The egg and chorizo hash delivered everything that dish should with generous quantities of chorizo and potato capped by a couple of well-cooked fried eggs.

Joe’s Kitchen lived up to my friend’s recommendations. Having been at a 2 Michelin Star restaurant 6 days previously, it’d be easy to let my focus linger on a couple of minor mis-steps in the cooking, but with damage of around fifty quid for two courses and a couple of drinks each, Joe’s is a safe bet. The food and service were decent and environment friendly.

NB: While this review meal was free of charge, opinions are my own.