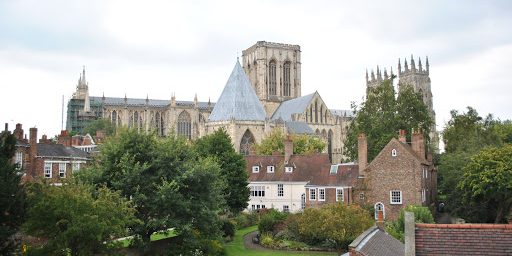 Summer is almost upon us after what seems like an eternity of rain, wind and short winter days, so we heartily endorse getting yourself out and about to sample some of the lovely beer gardens our fair city has to offer. Here you can find a bunch of our favourites, enjoy!

The Lamb & Lion
Often held up as the finest beer garden in York and for good reason. The L&L is a lovely pub that always has good quality cold lager as well as a few well kept handpulls, but the view from the garden really is a the real draw. There’re few better places to absorb the admiring glances of tourists walking the walls while taking in the Minster’s majesty.

The Fulford Arms
A short walk from the town centre along Fulford Road will bring you to the Fulford Arms. While now primarily a music venue, that’s not to the exclusion of functioning as a pub…or indeed a beach. Plonked at the side of the garden and car park is an urban beach that, on hot days, is serviced from a small outside bar. I can’t think of any where else in the city that you can get sand between your toes with a cold drink in your hand!

The Phoenix
After years of neglect, the Phoenix received a wonderfully sympathetic refurbishment to become a beacon of jazz and real ale just inside Fishergate bar. After a couple of changes of management, the jazz continues and the range of beers is still diverse, while the paved courtyard catches the sun nicely to look inviting from the walls.

The Habit
The terrace here is another place to absorb the majesty of the Minster. The Habit offers live music, good beer and a relaxed atmosphere on Goodramgate.

The Whippet
Whilst mainly known for its fantastic steaks, the Whippet functions perfectly well as a bar too and has a small but perfectly formed outdoor space. With artificial grass and a non smoking area, it makes a calm refuge from other city centre bars.

Blacksmiths Arms, Naburn
Feeling active? Why not hop on your bike and head south on the cycle path to Selby where you can find this garden that features a BBQ section. After taking in the scale model of the solar system along the path, this is a superb spot to take on sustenance before tackling the comfortably flat ride back to York.

Judges Lodgings
After its extensive renovation a few years ago, the Judges Lodgings has been transformed and now offers two fantastic outside spaces. While the area at the front can get extremely busy at weekends, it’s worth making your way through the bar to check out the terrace at the back of the building.

The Star Inn the City
Similarly to the Whippet, the Star’s status as a restaurant draws attention away from the fact that it has a bar available regardless of your dining plans. The terrace overlooking the river is one of the nicest places to sit in York while you enjoy Czech lager from the stunning copper tanks on show in the bar.

The City Screen
A York institution, the City Screen has been keeping us in culture and food for years while offering performance spaces and a cosy terrace overlooking the river. Competition for a table can be fierce so don’t relinquish one lightly!

Dyls
In June 2017 Dyls will be reopening, bigger and better than ever! With a new 3-floor capacity inside, the bar will be open all year round, serving an exciting new food and drinks menu. The terrace that overlooks the spectacular view of the river will also have the great addition of more seating and be fully heated and covered for added shelter on those colder evenings.

The Falcon Tap
The Micklegate resurgence has been so quick that it’s hardly acknowledged in some York company. There’re a few bars still focussed on the stag do trade, but the restaurants and social setup on Micklegate has been transformed over the last couple of years. The Falcon Tap has been forging a reputation for a diverse beer range and it has a lovely outdoors space in which to sit.

Brew York
Brew York has really made a mark in the short time since its opening, winning awards for its superb beers and quickly becoming a buzzing place to meet up, but it also offers some wonderful views of Rowntree Wharf from the small smoking area and terrace. Obviously the views are enhanced by the addition of the drinks, but it’s a charming space to be in.

Honourable mentions also to the Golden Lion, whose roof terrace is closed at the time of writing but due to reopen shortly after a refurbishment, The Fox in Holgate for scale and BBQs and the Fossgate Social for creating a secluded spot in the centre of town. It may be stretching the definition of a garden, but also don’t forget the York Tap has space on the platform if you’re up for some train spotting.