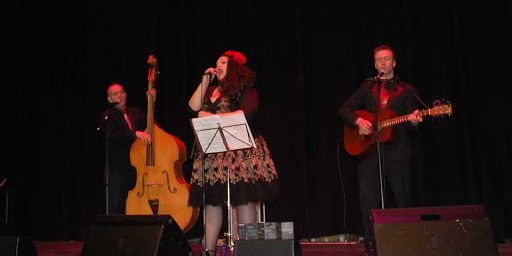 There are no new frontiers to be reached with alcohol. Beer, wine and spirits have been around since the dawn of time, though every few years one particular drink will resurge into the public consciousness. The economic downturn of 2008 led to champagne served by the glass soaring and craft beers have been enjoying a moment for a few years, but gin is back on the scene in more varieties than your local’s landlord could imagine and Gin Festival is here to make sure you know all about it.

My companion and I approached The Barbican last Saturday lunchtime with few expectations. We were told there would be gin, and neither of us were driving, so it was a no-brainer. We were handed a welcome pack which contained a bulbous glass and The Gin Book, and were directed towards the auditorium, where visitors could purchase drinks tokens. (£5 a token; one token buys you one drink.) Poring over our little Haynes manual of fun (that is, The Gin Book), my friend and I both fancied the look of bottles on Bar D.

Susan opted for a doubly local tipple in Yorkshire’s Slingsby Rhubarb, while I remained fruity and had the Zymgorium Extra Gooseberry. Lengthened with Fever Tree tonic water, we managed to snag a place at the picnic benches with ninja efficiency within seconds of them being vacated. Over the weekend, 2,700 guests were expected to attend, which showed, as getting seating close to the action required a little waiting.

The Slingsby Rhubarb was a straightforward gin: crisp, refreshing and sweet enough for that bracing zing of summer fruit. The pleasant rose hue made for an attractive glass.

The Zymgorium Extra Gooseberry is a unique blend of gooseberry and botanicals for a vivifying kick. Layers of flavour add interest throughout the sip, starting with the tonic fizz and leaving an aftertaste of whatever Englishness tastes of. A blend of sour fruit, aromatic herbs and a desire/disdain in equal measures for the monarchy (or something like that).

The festival was a lively and bright affair. Entertainment was provided by the fabulous Em Brulée and the Do-Rite Trio. Smooth jazz, big vocals and retro fashion hit the spot for agreeable event music.

My friend and I returned to Bar D for round two and by coincidence we both opted for vanilla gins. The Edinburgh Plum & Vanilla, served with soda as recommended, was again the same shade as Lady Penelope. This drink really displayed plum to its best and I hope that the reliable English fruit sees a resurgence once everyone’s gotten over kale and quinoa.

Braekman’s Vanilla Jenever was served neat and had a creamy appearance. I’m a big believer that comparison is the killer of all joy, but the closest drink in terms of texture and flavour profile which most people would be familiar with is Bailey’s. Apologies to Braekman. It’s creamy, it’s sweet, it’s delicious and a million times better than the Irish cream. While I regret making that comparison, we liked it so much it was the only bottle we left with, so that’s saying something.

Much credit goes to the organisers of Gin Festival for a thoroughly well thought-out event. Putting almost 3000 people in a room over the course of two days and giving them strong alcohol is a logistical risk which requires big goolies to take on, but every member of staff was completely courteous, available to us and couldn’t be helpful enough. The venue was well-presented with signed directions, and no spilled drinks nor discarded glasses.

After our tastings, we were invited to visit the pop-up off-licence to purchase from the tasting menu, with gins retailing from £18 to £48 a bottle. This is where Gin Festival comes into its own. Ask your barman for a Puerto de Indias Strawberry with tonic, ice and a slice and you might confuse him at best, and get banned from Wetherspoons if you’re lucky. Not here, where every exquisite bottle is stocked. Branded t-shirts, screen prints and other collateral were also available to purchase. The website ginfestival.com also sells the range by post.

Gin Festival is a marvellous social event, a nice afternoon out of the rain, and great for those who just fancy trying some new drinks they’ve never heard of. Carpe diem and get yourself to Gin Festival, expand your knowledge and show off to your cool friends while gin is in. Snakebite season may be upon us next…