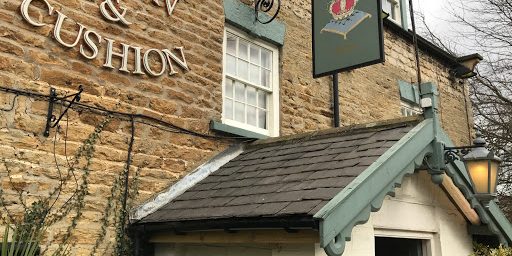 The Crown and Cushion Welburn is a popular spot for a post-walk Sunday roast amongst friends of ours and occupies a nice location not too far from Castle Howard. Recently we decided to mix things up rather dramatically by… going for a walk after lunch instead of before.

The first of our party (Mrs YoaF and I) arrived slightly early and didn’t realise that we were gatecrashing a staff meeting as we entered the bar. Fortunately the essentials seemed to have been covered as the staff didn’t make us feel awkward and set about their duties for the day after furnishing us with drinks at the bar. Further evidence of the staff’s professionalism came with their smiling willingness to shuffle place settings as we varied the party size slightly while waiting for everyone to arrive.

This was never intended to be a drawn out, elaborate affair so I’ll reflect that by not harping on about every detail of every dish around the table, but suffice to say everything hit the spot. Those of us who opted for roast lunch were satisfied with meat that was mercifully not overcooked; the fish and chips was generous in quantity and flavour while the half chicken was imposing and moist. More positive noises floated across the table when diners were presented with the Cumberland sausage and porchetta dishes. The accompaniments largely hit the spot too, although the roast potatoes could have ended up a touch crispier.

The Crown & Cushion Welburn is a welcoming and reliable place to eat that also happens to be in the middle of some stunning countryside. It probably deserves patronage outside of the Sunday lunch specific role in which I’ve cast it, but it certainly does a cracking roast.